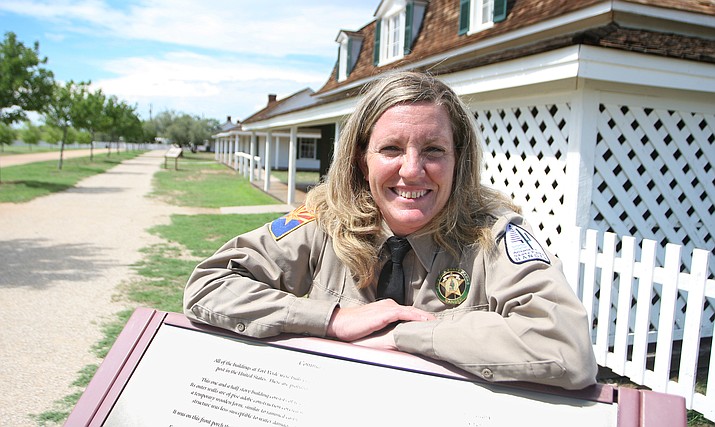 Then, a complication set in.

“I’m behind the scenes!” she told Nikki Miller of Camp Verde Promotions. “I help run the event!”

Stubler admitted that her response was more being practical than anything.

Once Stubler realized that it was real – that she would be representing Fort Verde, as well as Camp Verde in the parade – she knew that she couldn’t represent Camp Verde alone.

Because it takes “a lot of people working together” to make the Fort a success,” she says.

“As long as I can have volunteers with me,” she told Miller.

“I wouldn’t be in the position I am in today if it weren’t for the volunteers and all of our partnerships. It’s a blessing to serve the needs of the community at this park.”

It’s no surprise that Stubler wants to thank the Fort’s many partners for her opportunity to be the annual parade’s grand marshal.

“Hold the Fort, the Town of Camp Verde, Camp Verde Promotions, the Camp Verde Cavalry, Yavapai County and all the other organizations, staff and volunteers that have provided support during my 14-year tenure at Fort Verde,” Stubler said. “I couldn’t do it without them.”

Truth is, much of what the community’s volunteers are able to accomplish might not be possible if it weren’t for Stubler, who has “gone through the tough times for the town and the fort,” Miller said.

Heart of a servant

Not only does Stubler want her family of volunteers on the Fort Verde Days parade float with her, but she also wants her father, John Charles Stubler, to be part of the celebration.

“He always raised us to help out,” Stubler said of her 80-year-old father, who still lives after all these years in La Crosse, Wisconsin.

When Miller was finished telling Stubler that she had been chosen as parade grand marshal, Stubler called her father.

“I get my work ethic from my dad,” Stubler said. “He’s such a huge inspiration. To this day, he gives back to his community. At a young age, he instilled the heart of a servant.”

“The Fort is an essential part of our history and it brings in hundreds of visitors, if not thousands a year, helping the town’s economy,” Miller said. “Sheila is always promoting the Town and the businesses in town, plus the Fort puts on several special events each year. She works hard and is proud of the Fort.”

Reenactment events held each year at Fort Verde include Buffalo Soldiers in February, History of the Soldier in April, Flag Retirement Ceremony in November and the Victorian Christmas in December, as well as more than a dozen 1860s-era vintage base ball games, all events that provide opportunities to preserve “this gem of a historical site and providing the public an opportunity to experience history.”

One of Stubler’s favorite parts of running special events is being able to “honor our veterans and active military by hosting reenactments, having the opportunity shake their hands, and personally thank them for sacrifices made while serving our country.”

Always with a glass half-full focus, Stubler even finds positive in the eight-year period that she was the Fort’s only full-time staffer.

The silver lining, as she calls it, was when a group of Camp Verde volunteers created the fundraising group Hold the Fort.