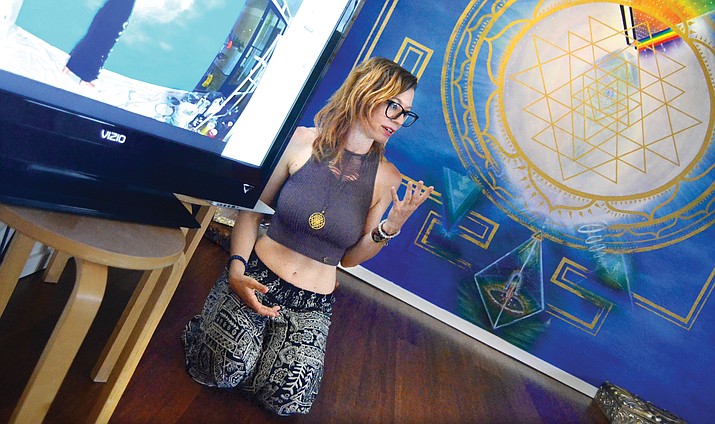 Caitlyn Saville explains the process of painting her mural at Aumbase in Sedona. VVN/Vyto Starinskas

The annual Sedona Yoga Festival has opened a daily yoga center for the local community.

Marc and Heather Titus, the owners of the five-year old SYF, have opened Aumbase at 1225 West SR89A, Sedona, which now offers seven-day a week yoga studio taught by 11 different teachers from the community.

During the past year, the couple have been creating the space which is brightly lit by windows and views of the Sedona Red Rocks.

Las Vegas artist Caitlyn Saville on Thursday unveiled her mural at the facility in front of a group of members, friends and artists. Saville, who primarily paints large murals in Las Vegas, explained the process of painting the mural and how she came to Sedona.

Heather Titus said there are excellent teachers at the donation-based Aumbase and it’s open to the community. Occasionally there will be trainings and retreats.

Many presenters at the SYF wanted to bring back students to Sedona, so now they have created a center, explained Titus. Many people in the community really enjoyed the Yoga Festival and asked if they could do something during the entire year, she added.