5 haunted dwellings of the Verde Valley
From Camp Verde to Sedona, much goes bump in the night 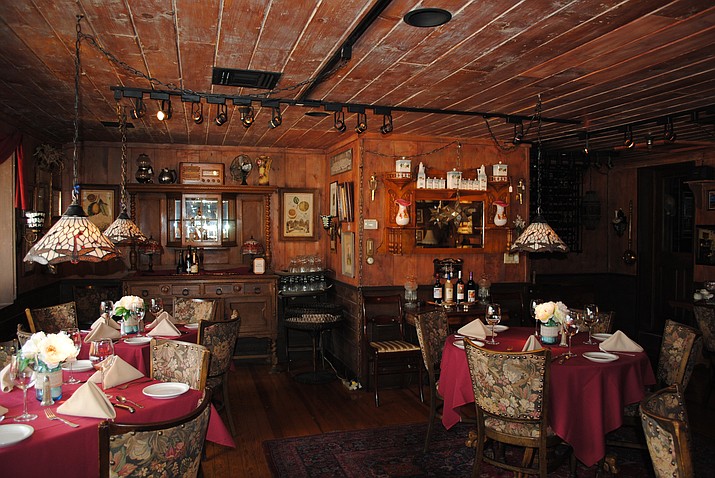 The original property owner of the Relics Restaurant and Roadhouse is said to keep an eye on things. (VVN/Jennifer Volpe)

Below is a list of some the most haunted stopping grounds from Camp Verde to Sedona.

Spook Factor: 6. Peaceful, but a rough, western past can add heaviness.

Brief history: Construction of the Clear Creek Church, built from quarried limestone from surrounding hills, began in 1898. It served the local Methodist community until 1913 when the congregation built a new church closer to town. During WWII, it was used as a cannery. The dilapidated building was eventually donated to the Camp Verde Historical Society. Volunteers restored it from 1975-1979. The church now occasionally hosts tours and weddings.

Across from the church, located on a five-acre plot, is Clear Creek Cemetery. The area’s most noted pioneers are buried here, going back to the late 1800s. Today, it is still a final resting place for those who have passed on. Volunteers both manage and maintain the grounds. To donate to their efforts, contact Linda Callahan at 928-821-1052 or email her at butter8356@gmail.com.

Who may haunt it: Clinton Wingfield and Mac Rodgers, two young businessmen who were murdered during a botched robbery at Sutler’s Store in 1899. The crime was reported in newspapers across the country. The two are buried at the cemetery.

Tips for ghost hunters: A directory of the cemetery is to the left after you walk through the gates.

The Cottonwood Hotel is rumored to be the home of mischievous ghosts. (VVN/Jennifer Volpe)

Spook Factor: 7. Some of the permanent ‘guests’ are rather curious.

Brief history: Cottonwood’s oldest hotel was originally called the OK Hotel in 1916. It became the Cottonwood Hotel in 1917. The original structure burned to the ground during the 1925 town fire. The town fire bell was erected on the roof of the hotel after it was rebuilt, remaining there until 1960. Joe Hall, a notorious bootlegger, stayed here in 1917, and so did screen siren Mae West in 1930. John Wayne and Gail Russell were guests in 1948 while filming “Angel and the Badman.” The hotel was a backdrop in numerous films, including 1967’s “Stay Away, Joe” starring none other than Elvis. Owner Karen Leff bought and restored the property in 1996. It now operates as a boutique hotel.

Who may haunt it: Reverend George Brooks, the only person in town to die from the 1925 fire. There is also a female spirit who is something of a kleptomaniac.

Tips for ghost hunters: November and December seem to be the most active. George likes suites 1 and 3.

The original property owner of the Relics Restaurant and Roadhouse has been seen and heard by staff members. (VVN/Jennifer Volpe)

Spook Factor: 8. There’s a strong presence, but it is friendly.

Brief history: It was built in the early 1900s by the Gibson Family on the last homestead available in Sedona. Over the years it’s been a general store; a gas station; a military registration and recruitment center; a saloon; various restaurants; a movie set; and even a skating rink. Owners Joe and Karyn DeSalvo restored the building from 2003-2006. The property features a restaurant, bar, and banquet facility.

Who may haunt it: Frank Gibson, the original owner of the homestead. He’s the perpetual caretaker, and makes a point of making sure the building is being well-maintained. Other notable ‘guests’ include previous patrons who are dressed in clothing from another time period.

Tips for ghost hunters: Frank turns up everywhere on the property, but the Lawson and Gibson rooms seem to be the most active.

Spook Factor: 9. It seemed normal until a bat swooped down the stairs at the beginning of the tour.

Brief history: David Connor’s hotel was built in 1898. The stone foundations were quarried from nearby hills, and the brick was fired in Cottonwood. The first-class establishment offered rooms upstairs and a barroom, card rooms, and billiard tables on the first floor. Rooms were rented for a buck a night. The hotel has been burned to the ground twice, but Connor was able to use insurance money to rebuild. His hotel closed in 1931. Shops downstairs were rented out, but when the mines closed in the 1950s, it sat idly. It enjoyed another run during the 1960s and 1970s as a hippie hangout, but the hotel closed again in the 1980s out of safety concerns. Renovations began in 2000, and since, the hotel has been restored and made beautiful again. The Spirit Room Bar and a gift shop are located on the first floor.

Who may haunt it: A bartender named Kiro. There is a ghost dog who occupies room No. 5. A ‘Lady in Red’ and a male spirit sometimes appear.

Tips for ghost hunters: Rooms No. 1, 2, and 12 have the most activity. The Spirit Room caters to those of their namesake.

The outline of the body of former maintenance man Claude Harvey, who was found pinned beneath the elevator, can be seen at the Jerome Grand Hotel. (VVN/Jennifer Volpe)

Brief history: It was constructed in 1926 and operated as Verde United Hospital in 1927. Rumor has it there was a TB ward, and also a psychiatric unit. In 1930, it was dubbed the most modern and well-equipped hospital in Arizona. The hospital closed in 1950 as mining faded out, and stood vacant for 44 years. In 1994, it was purchased by the Altherr Family from the Phelps Dodge Mining Corp. This is when the restoration and rehabilitation started. The Asylum Restaurant on the property offers lunch and dinner, along with (liquid) spirits. The hotel is the largest National Historical Landmark building in Jerome.

Who may haunt it: Claude Harvey, the hospital’s maintenance man who was found pinned to death beneath the elevator in 1935. Many believe he was murdered. Sightings of hospital staff have been reported, and children and infants have been seen and heard. Folks tell stories about a spirit cat. And there are others; nearly 9,000 people have died here.

Tips for ghost hunters: The elevator is creepy. The former operating room, where many met an untimely fate, was on the third floor. Two reported suicides occurred in room No. 32.