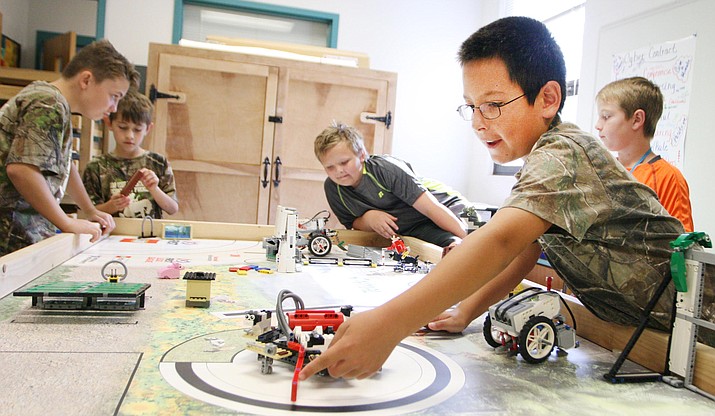 Robotics is one of the several 5t Day programs available at Camp Verde Unified School District. (Photo by Bill Helm)

CAMP VERDE – Dr. Dennis Goodwin says that the best way to keep students engaged is to give them choices. Better yet, give children lots of choices.

The district has also circulated a list of possible programs that include film and video production, Lego youth engineering, theater, youth public speaking and community volunteer work, which will be part of a survey the district will soon make available.

“Offering things I think the kids would find more fun” is part of Dr. Goodwin’s plan to make the school’s Friday programs a young person’s go-to place leading into the weekend.

In years past, the primary focus of the district’s Friday programs has been the elementary school. But middle schools now have Friday programs, and eventually, so will the high school.

On the success of the district’s robotics program, Dr. Goodwin has named robotics coach Peggy Dickey coordinator of the 5th Day programs, a decision that was officially announced at the District Governing Board’s Aug. 8 meeting.

“They saw the robotics program and how it had grown,” Dickey says. “They asked me if I could do it with all the programs.”

The district has also changed the name of its 5th Day programs to Friday Camps, which Dickey says “emphasize[s] that this is a day of fun.”

That, and working with children.

Though she piloted the district’s robotics program, Dickey calls herself “the least technologically savvy person” she knows.

“It never crossed my mind that I would teach robotics,” she says. “So I called Arizona State University, and they loaned me five robots. I went to a couple of workshops. For the first robotics class, I asked for 10 guinea pigs. That’s how we got started.

That was three years ago.

“Now, I know the programming,” she says. “I could teach advanced robotics, with the robots we have. I never expected me to be the person to do this. Long story short, the robotics took off.”

“Our family now designs our vacations around the underwater robotics in San Diego,” she says.