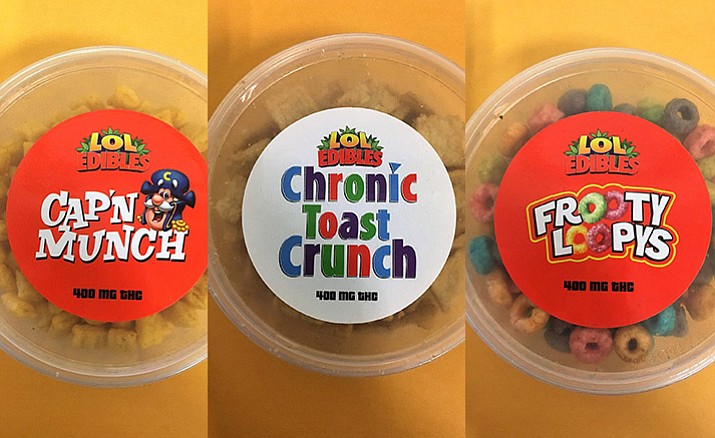 A garbage bag containing marijuana edibles was found inside of a cooler during a traffic stop in Ash Fork Aug. 9. (Courtesy of YCSO)

ASH FORK – A cooler containing a garbage bag full of marijuana edibles, hash, hash oil and other THC-based products was discovered during a traffic stop Aug. 9 in Ash Fork.

Around 6:45 a.m., a Yavapai County Sheriff’s Office K9 deputy conducted the stop on a white passenger car regarding an equipment violation on I-40 East, according to a news release from YCSO.

The driver identified himself as Demitrio Uriostegui, 22, from Texas.

While speaking with the driver, the deputy could immediately detect a strong odor of marijuana coming from the vehicle, according to the release. There were three passengers in the vehicle including Gerardo Lopez, 25, and Julian Camacho-Soto, 27, both from Texas.

In order to determine the source of the odor, a search of the vehicle was conducted. Deputies found a white cooler containing a garbage bag full of marijuana edibles and many other THC-based products, according to the release.

During follow-up, Camacho-Soto admitted to ownership of the cooler contents. Lopez acknowledged possessing a quantity of marijuana found near the front seat. Uriostegui admitted possession of a portion of the content in the cooler. The fourth passenger, a female, was not charged.