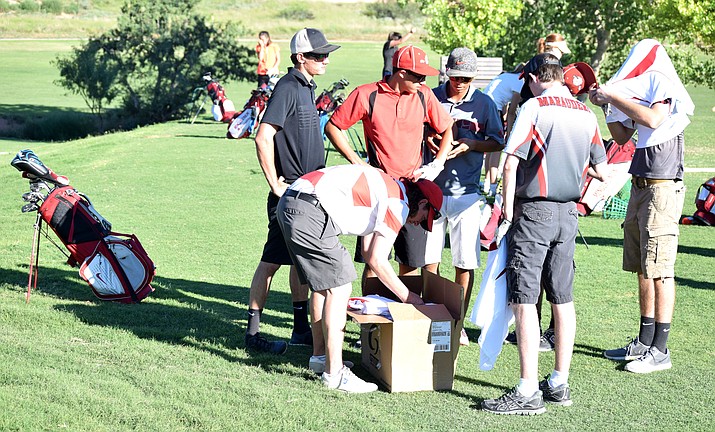 Last year the Marauders won their section and made it to state for the first time since 2009, where they took 14th.

“I think it’s a very realistic goal for us to be section champions this year, if we play well, if we do the things that we’ve been focusing on in practice and continue to get better,” said Mingus head coach Craig Mai. “I think we have an excellent chance of being right there in the thick of it and a really good chance of winning.”

Senior Tyre Kim said he thinks that experience at state last year will help the Marauders.

Though the Marauders lost two seniors from their starting five, led by Keagan Lamb, who would have qualified for state as an individual had the Marauders not, the replacements have done well.

Mai said he’s very excited about how the Marauders are hitting the ball and now he wants them to tighten up on their driving and be willing to put the driver away.

“All our guys have the length, we don’t have anybody that are short in our top five so they don’t have to be trying to stretch out to find more distance, it’s more of ‘hey I can back off’ and make sure we’re in the fairway and play,” Mai said.

“As far as my experience with our teams, it’s unusual for us to have all five kids that can hit the ball a long ways,” Mai said. “Usually we might have a couple of bombers, but the rest of the team are fairly medium distance, but this year all our top five can hit it past me, so I consider them long (laughs).”

Kim said working on his short game was a big focus during the offseason.

“I can hit the ball pretty far, so it’s like I’ve always been able to get it to the green, just not get it in the cup from there, so I just need to work on that short game really,” Kim said.

Mai said Daher has worked hard since the end of last year and will fit in well in the top five.

“He started out low on the totem pole and now he’s No. 4 on varsity, so he’s doing really, really good, improving,” Brogdon said.

Mingus Union opens up the season on Tuesday at home at Verde Santa Fe Golf Course in Cornville when they host Prescott, Bradshaw Mountain and Page at 3 p.m.

On Sept. 19 Mingus Union hosts Anthem Prep, Flagstaff and Bradshaw Mountain and on Oct. 5 they have a home match against opposition that is to be determined. They close out the regular season by hosting the John Uidenich Memorial Invitational.

On Sept. 8 they travel to Aguila Golf Course in Laveen for the Aguila Invite.

“It’s mostly up here in Northern Arizona, we do have one tournament down in Phoenix,” Mai said. “It’s kind of a big tournament that we look forward to playing in every year, we go down there, spend the night, see some pretty good teams down there.”

Brogdon said he has seen the team grow a lot in his four years and his game has at well. He’s learned more about the game and even got a job at Verde Sana Fe.

“We’re going to be pretty high up there, hopefully like last year, section champs, I think we have the team to that this year,” Brogdon said.

One big change this year is the addition of a ladies team for Mingus Union.

Mai said he thought it would help out the gentlemen’s team and Kim said the urge to be a role model to their younger teammates (all the girls are freshmen) adds more pressure.

“It’s gotten a lot better, the girls team is a huge addition,” Tanner said. “It’s a thing for my sister to do, she’s on the team as well, so that’s pretty awesome.”

Mai thinks Mingus Union’s main threats could come from the north and the south.

“I’m thinking that Prescott and Flagstaff are going to be the two toughest teams,” Mai said. “They were young last year, they were kinda that next tier down, but they should be returning everybody back from their teams I think they’re going to be the tough ones for us.”

The state tournament is October 23 and 24 in Tucson.

Even Mother Nature has played nice so far for the Marauders this year.

“So far the weather has been perfect for us, so I’m keeping my fingers crossed, knock on wood, whatever,” Mai said. “We haven’t had any problems with weather delays for practices this year and that’s rare, usually we have one or two due to monsoons. So we’ve had a lot of time to practice here so it’s been nice.”