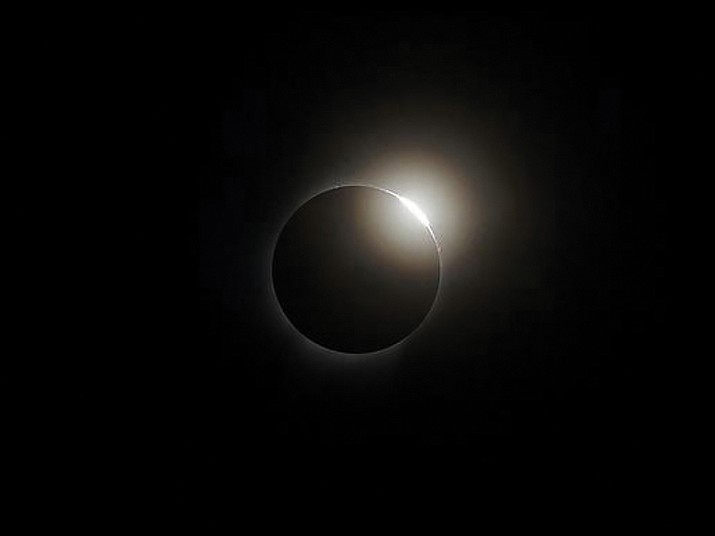 (Photo by The Exploratorium)

Solar viewings held by the Astronomers of the Verde Valley allow those curious enough to see the sun in all its blazing glory, even on a hot summer day.

Starting at 9 a.m. the library will be giving out solar glasses and hosting a viewing. The library will also be live-streaming the event on their big screen.

The Prescott Valley Public Library and the Prescott Astronomy Club will be hosting a Solar Eclipse Celebration at the Civic Center Amphitheater from 9 a.m. to noon. There will be telescopes designed for safe solar viewing, talks, NASA livestream of the total solar eclipse, and more.

The Sedona Lookers are hosting a star party at Sedona library during the eclipse in the front parking lot. Sedona Library will also be offering 200 free eclipse solar glasses to viewers for the event that morning at 9 a.m. There will be binoculars with safe filters to view it up close and in 3D.

The biggest solar event of the century – the Aug. 21 Total Solar Eclipse – will block the sun entirely in a span that reaches coast to coast.

“Eclipses are quite common.  Both solar and lunar eclipses occur roughly every six months, but eclipses are not always total,” said Diane Dutkevitch, an astronomy instructor at Yavapai College.

The Verde Valley will get 68-70 percent totality during the Total Solar Eclipse. According to Dutkevitch, the span of totality is only about 75 miles wide, leaving Arizona outside the span. While 100 percent won’t be possible to witness within the state, astronomers say the event is nevertheless worthy of attention. This eclipse will peak at approximately 10:34 a.m. in Cottonwood and 10:32 a.m. in Prescott.

Catch the eclipse on Aug. 21 at some point between 9:15 a.m. to noon, because the next chance to view an eclipse in the United States will be in April 2024, with a totality from Texas to Maine.

An eclipse occurs when the moon blocks any part of the sun, causing the Moon’s shadow to sweep across the Earth. According to Jeffrey Hall, Director of Lowell Observatory, this year’s eclipse stands out because anyone in the country can view it, no special scientific background or equipment required.

“It’s unusually accessible. Instead of being over ocean or a remote land area, it crosses the entire length of a densely populated continent. This will make it probably one of the most viewed celestial events in history,” said Hall.

Without totality, the partial eclipse won’t be safe to look at with the naked eye.

“At no time in AZ will it be safe to look at the Sun without filters specially designed for solar viewing,” said Dutkevitch. “Do not attempt to look at the sun through binoculars, not even for an instant.  The light intensity will be hundreds of times greater than if you looked at the sun directly. Think of how you can burn things by concentrating the light from the Sun with a magnifying glass.  The effect would be the same if you looked at the sun through binoculars.  You don’t want to do that to your eyeball.”

Enjoy the eclipse, as the next one will take a few decades, and do so safely.