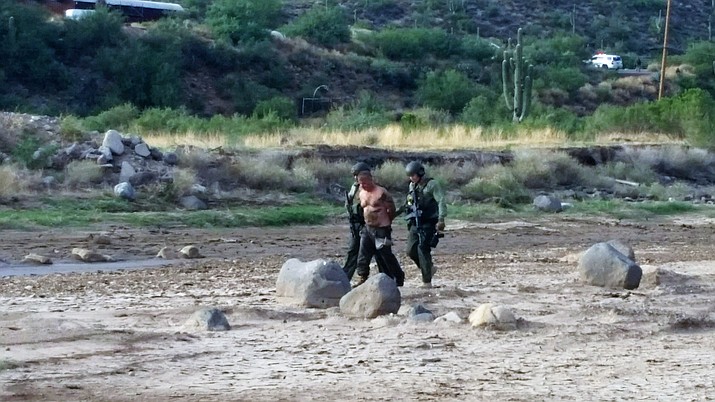 Officers lead Scott Albert Wayne, 54, away from the riverbed in which he was found Sunday afternoon. He was arrested after claiming he was carrying an explosive device in his pants pockets. (YCSO/Courtesy)

Yavapai County Sheriff's Deputies arrested a man who claimed to be carrying an explosive device in his pants pockets Sunday, following a domestic violence incident.

Just before 8 a.m. Sunday, Yavapai County Sheriff’s Deputies were dispatched to the Black Canyon City area regarding a domestic violence incident. It was learned the suspect, 54-year-old Scott Albert Wayne, was currently roaming around town and possibly armed. Wayne also had a felony warrant out of California listing him as armed and dangerous.

He was eventually spotted around 2 p.m. attempting to hide in a riverbed area off Tara Springs Road by a DPS Ranger helicopter crew. Deputies approached and Wayne claimed he was carrying an explosive device in his pants pockets. A fire in the area was also detected and may have been started by the suspect.

Deputies backed away and directed Wayne to remain in an open area of the riverbed. A containment was set around him and bomb squad technicians from the Department of Public Safety were requested. Wayne was cooperative pending their arrival. Once on scene, the bomb squad techs were able to eventually approach Wayne and render the apparent explosive device safe and take him into custody — see photo. The arrest occurred around 5 p.m.

During the incident, deputies located a firearm Wayne hid in the river bed. The handgun is likely connected to the original domestic violence incident. The victim is safe. The fire was eventually extinguished by local fire personnel.

US Marshals and the YCSO SWAT team were on scene throughout the incident.

The investigation is active and further details will likely be available on Monday. Exact charges are unknown at this time.