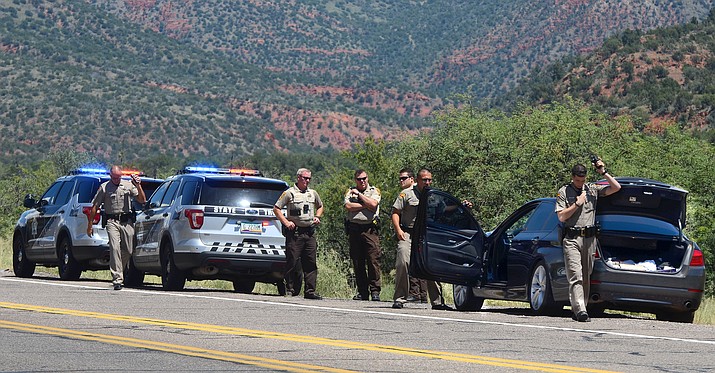 The driver of this BMW was booked for felony flight, reckless driving and criminal speed after being stopped by DPS and Yavapai County Sheriff’s Department with tire spikes on SR179 in Sedona Wednesday, according to a DPS spokesman. At one point, the BMW was traveling at 140 miles per hour, said the press release. After the vehicle left I-17 and was westbound on SR 179, the DPS trooper backed off and the vehicle was monitored by a DPS Ranger Helicopter until the vehicle was stopped, DPS stated. DPS trooper first noticed a 2012 BMW speeding by him northbound on I-17 near the junction to SR169, said DPS. At the time, the trooper believed the BMW was traveling at 127 mph, the press release said. The BMW exited I-17 and was westbound on SR 179 en route to the Village of Oak Creek when deputies from the Yavapai County Sheriff’s department spiked the tires of the vehicle, according to DPS. The driver, 23-year-old Ricardo Antonio-Partida-Montoya of Tonapah was booked at the Yavapai County Detention Center, stated the press release.