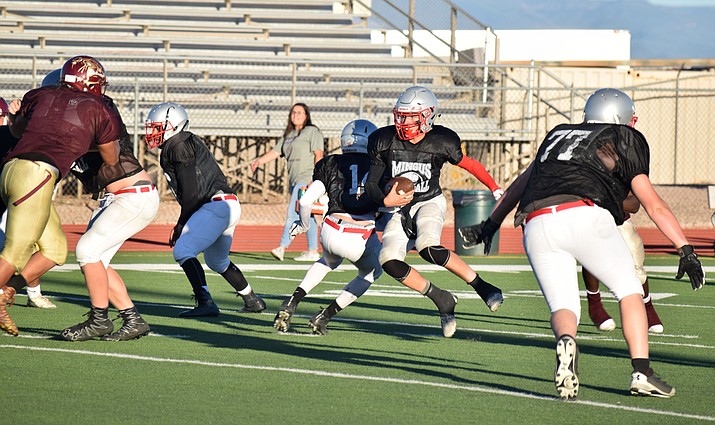 Mingus Union football lost a lot of talent from last year’s playoff team but hopes to have reloaded.

The Marauders open the season on Friday at Gilbert Higley.

“We’re getting better, slowly but surely,” said Mingus head coach Bob Young. “We’ve got a few more guys out, so our numbers are up but we’re still looking for some second strong guys, that’s been our problem the whole time, we’re still looking.”

Last season the Marauders went 6-4, 5-1 in the Grand Canyon Region and 10 selections on the All-Region’s first and second teams, eight on the first team but all graduated.

“That’s kind of the way it always is, every year we lose good players and if our program is strong enough, then the next guys step up, so we just got guys that need to step up and perform,” Young said.

New starting quarterback, junior Antoine Zabala said he’s really thankful to be the No. 1 signal caller and that it’s a dream come true.

Mingus Union added senior Martin Soria who was first team All-State for 1A Williams but he is not eligible for at least the Higley game due to transfer rules.

Mingus Union faces a stacked schedule, with four teams in the Arizona Republic’s preseason state top 10, led by No. 3 Higley. However these are familiar foes.

“It’s the same as last year so it looks tough but I think we’re ready because we faced the same teams last year,” said Mingus junior safety/receiver/quarterback Chaz Taylor. “It will be a challenge, but it will be good for us to have the challenge.”

If the offensive line does well, the Marauders offense could be explosive.

Young said the o-line has been improving.

“That’s the area we lost everybody, so everybody that’s playing is brand new to varsity,” Young said. “So they’re working at it, they did a really good job in the scrimmage last week, I was really excited about that so we just need to keep getting better.”

Young said Zabala has done well. Zabala, Taylor, Soria (a quarterback at Williams) and sophomore Peter Calandra have all attempted passes in the preseason.

“Antoine’s done a really good job,” Young said. “Chaz has got back up reps, his focus has got to be on defense but Antoine’s been solid.”

“They’re all going to alternate,” Young said. “Most of those guys play defense, so I’m going to have them alternate on offense.”

Although Taylor is fairly new to receiver, he impressed in the four-way scrimmage and in the Red and Gray Game.

“Chaz has looked really good, Chaz is a big play guy and the rest of the guys are young, they haven’t proven themselves but Chaz is the one guy I can count on,” Young said.

Back seven lead the defense

Just like the offense, on defense the line is new and skill players impressed over the summer and in the preseason.

“D-line’s a lot like the o-line, untested, we’re probably going to start two sophomores, they’re going to have some growing pains, but they’re going to get better every week,” Young said. “We’re excited about it.”

“There’s a mixture of guys that played last year and some newbies,” Young said. “Colby Fanning, Chaz, Jordan Huey, they all played last year Marcos Valenzuela is new, depending on who else is back there, but our linebackers and our DBs, I think based on 7-on-7, that’s the strength of our defense.”

Mingus’ biggest loss was on special teams but Young expects the return teams, kick off teams and punt teams to do well.

“We lost an all-state kicker in Trey Meyer, it’s hard to replace that,” Young said. “So it’s just a whole different thing, we’re kinda angle kicking and doing stuff like that I think the return teams are going to be good, punt and kickoff we’re going to do good because we’re not going to be kicking the ball into the end zone that much.”

Although Higley is a tough opening game, it might be the type of game that helps prepare a team for the season. Last year the Knights beat the Marauders 63-36 in Cottonwood as Draycen Hall, a USA Today preseason All-American ran for 344 yards.

“I hope so (laughs) you play somebody like that you better be ready to go,” Young said when asked if an opening game like that helps a team prepare for the season. “They know, they know the challenges, they know it’s a really good team, this a team that came up here last year and beat us by three touchdowns and they got a lot of guys coming back, they got an All-American running back, so we know what the challenges are and we just go down there and play the best that we can.”