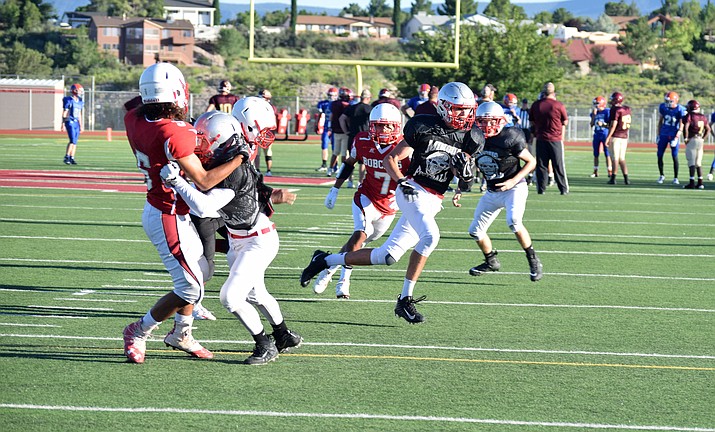 Mingus Union football has a unique problem when it comes to junior Chaz Taylor.

The versatile 6-3, 175 pound Taylor is wide receiver/defensive back/quarterback for the Marauders.

“When you don’t have a lot of players, that’s what you gotta do,” said Mingus head coach Bob Young. “You gotta mix and match, he’s basically our emergency quarterback. That would stink because if we gotta put him in then we’ve lost our best receiver (laughs). We gotta make sure that doesn’t happen, but if something happens and he needs to quarterback, then he’s done it before and he can run the offense.”

“He’s physical and that’s the reason we put him down there, strong safety’s gotta take on a lot of blocks and he doesn’t look very strong because he’s tall and skinny, but for his frame he’s got some good strength,” Young said.

VVN: So how’s the season been going for you?

Taylor: It’s early still but I think it’s been good. I’m at a new position, strong safety, because last year I played free. So it’s been a little bit of an adjustment but it’s been good. And receiving, I didn’t receive as much last year, so it’s been fun. I like it.

Taylor: I’d have to say free safety, but I’m liking strong, I’m starting to like strong more and more just because it involves more of the plays. I like all of them, I like receiving too.

VVN: How tough is it on offense to be receiving and playing quarterback? How much of a change is it?

Taylor: It’s not too bad, it almost helps with routes because last year I didn’t really know where to go with the calls and stuff. So playing quarterback has helped me and receiver has helped me at quarterback, vice versa.

VVN: Does that even help you on defense, understanding the game more, being a quarterback too and being able to read defenses?

Taylor: A little bit yeah, it’s not so much quarterbacking, it’s the film watching that we do, recognizing formations that we’ve seen and different formations and what plays to run out of those formations, so it’s really the film that helps me with that.

VVN: How different are those two sports?

Taylor: It’s different, but it’s actually helped a lot with basketball and football because with basketball court vision, that’s helped a lot with defense and it’s helpful because I was playing for a club team a while back and it really got me in shape once we started football again, that was good. They balance each other out, help each other hand and hand, but it’s different. It’s definitely different.

VVN: Have you thought about what you want to do after high school?

Taylor: I’m going to serve a mission for my church for two years.