Life in the Slow Lane: Eclipse and Elderberry

So, I'm sitting at my desk watching the day steadily darken with the eclipse. Unfortunately, there's nothing to see. Here in Arizona, the place famous for 360 days of sunshine a year, it's cloudy. That fact is likely to save my eyes. I can just imagine myself shooting a glance skyward without thinking. Yep, with only four chapters left in the book, it's safer for me to stay inside. 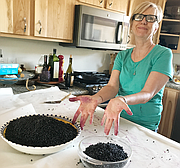 Onto the elderberries. A few years back someone mentioned to me that elderberries were the new big "thing." Not only was I told that the berries cure just about everything and that livestock love the foliage, but the flowers can be made into bitters. If you're not British, I'll explain. This is a sour, bitter or bittersweet liquor made from plants or some part thereof. More importantly, bitters are something you add to cocktails, such as an Old Fashioned. Yum.

All of that sounded great. But being a Westerner, pretty much born and raised, I was unfamiliar with what elderberry plants looked like--apparently they grow everywhere in the Midwest and East Coast--so I only bought six to start. I put them between my West-facing bedroom window and the pump house, thinking they might cover that uninteresting view. Now, almost six years later, they have just about done the trick.

I have a ten foot tall airy hedge that looks gorgeous when in bloom and attracts just about every berry-eating bird in the area. And even with that much bird pressure, the hedge is still covered with berries this time of year.

However, as with all claims I discovered that 1) I was going to have to harvest all those flowers and process all those berries, and 2) the livestock were less than impressed with the foliage. Always a downside, sigh. So what did I do?

I bought twenty more plants, of course. I bought them because I love that elderberries grow like weeds, form pretty hedges and are generally low maintenance. More than anything my hillsides need trees and bushes.

Over the many years of neglect, those hillsides have become quack grass heaven. If you don't know what quack grass is, consider yourself fortunate. It's one of those hardy "edge" plants, one that thrives on the edge of nutrition. It spreads both by rhizome and by seed. And it doesn't mind the blistering sun. So every hillside I have that lacks trees is covered in quack grass. The only way I've discovered to permanently remove it is pigs. Quack grass rhizomes are a tasty treat.

However, I'm not yet ready to put my piggy girls onto the hillsides when there's no way to guarantee they won't slip and slide into the ditch and be carried downstream to my neighbor's house.

Those twenty newer elderberry bushes--okay, a few less than the twenty originals because I got crazy with the weedwhacker and accidentally killed a few--have done better than survived. They've tolerated the blistering Western sun, over 100 degree temperatures, my forgetful watering and a hillside that I'm certain is deficit in nutrition to grow into four to six foot tall bushes. They've not only spread their seeds, adding more elderberry plants to my hillside, which I'm certain I'll accidentally weedwhack as well, they're beginning to drive out the quack grass.

Much to the pleasure of the nutsedge (which the pigs also like) and mullein. It's always something.

Recently my friend Laurie stopped by for a glass of wine on the porch.

Standing at the railing, she looked down at the hillside and asked, "Is that elderberry?" When I said yes, the herbalist replied with an excited "I'm making tincture!"

Cool! At last, something was going to happen with those berries famous for their healthfulness. By the way, they got their name "elder berries"

because they are, or were at one time, the premier healing berry in the botanical world.

She wanted to wait until they dried on their heads. I warned that the birds would get them all, so we settled on harvesting yesterday. Then she asked the most appropriate question. "So how do I get to them?"

Oh, that. There are paths on my hillsides. I carved them with my trusty Rogue Hoe. You just can't see the paths because they're hidden in the quack grass. So before she stopped by yesterday, I went out with my hedge trimmer and started cutting my way through the six foot tall stands of grasses. Then I started sneezing. Then I started itching. Once again I'd forgotten that I'm allergic to quack grass. That always happens on the first quack grass harvest of the year. But by the time she got here, she could walk to where most of the berries were.

We filled a paper grocery bag with berries in less than half an hour, surprising me. She sampled sorrel for the first time, surprising her.

Did I mention I threw French sorrel seeds on that hillside too? It's actually outperforming the fennel that I threw out at the same time, and it grows really well under the native walnut tree, always a plus. What do I do with all the sorrel? I watch it grow and work on the next chapter.

As we harvested, she talked about making the tincture, which I didn't know was supposed to be done on a full or new moon. That's when the subject of today's eclipse came up. We decided she should definitely tincture those powerful berries in the added power of the eclipse. Had to be good, right? After all, it's elderberries and an eclipse. I can't wait to see the magic at work!