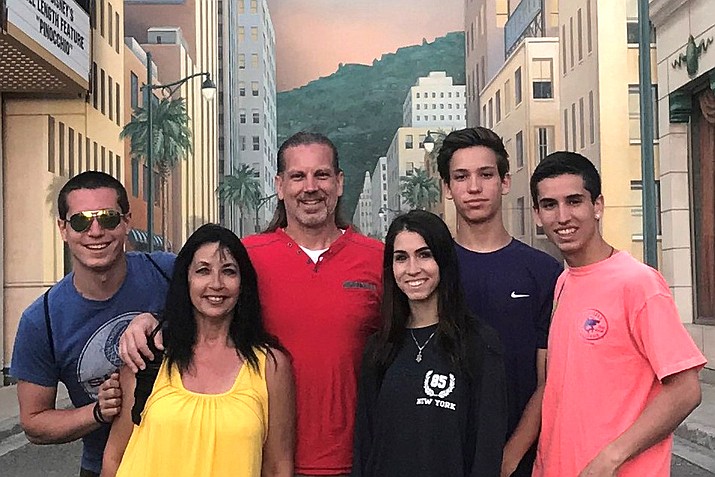 Jim and Cindy Cunningham and family during a Disneyland vacation. Courtesy photo

She is shy, intelligent, witty, accomplished, highly-educated, well-travelled, beautiful, charismatic with a wicked sense of humor: Cindy Gibson Cunningham is my wife.

But to know her is to know she is so unassuming you’d never know she was a college cheerleader, homecoming queen, in the Miss AZ pageant, 2 college degrees, homeschooled 4 kids, an amazing musician, sings and plays several instruments, loves to read, a VERY competitive athlete, overcame TWO miscarriages and a breast cancer survivor.

Cindy was adopted as a 3lb, 13oz preemie by an Air Force chaplain and his wife in Las Vegas, and grew up as a “military brat,” along with her two brothers, each adopted from different families.

They were assigned to military bases all over – Libya, Duluth, MN, Joplin, MO, Lompoc, CA, Tacoma, WA….Hahn Base in Germany was her favorite station and a life-changing experience because of a visit to nearby Dachau Concentration Camp.

Retiring from the Air Force, her dad moved them to Las Vegas to pastor and Cindy left for college at Cal Baptist in Riverside, California, earning a degree in Sociology/Criminal Justice.

After college she moved to Sedona with her parents where her dad pastored what is now Crestview Community Church. She intended to prepare for graduate work in Spain, but instead she met someone special (yours truly) and got married in 1985, the first wedding at L’Aberge de Sedona. A work move to Colorado Springs found Cindy attending Nazarene Bible College, majoring in music and later studying Court Reporting.

Another work move took them back to Vegas where Cindy completed her degree and worked as a stenographer. But once the kids came, she chose to stay home to homeschool them.

She became very active in her church, leading kid’s musicals, starting a bell choir, playing electric bass on the worship team and so much more the church gave her a lay-ministry award in appreciation of all of her volunteer work.

She also helped the woman’s crisis pregnancy center and ministered to ladies working in strip clubs.

Cindy also connected with both sides of her biological families (8 siblings!) and she still enjoys a beautiful relationship with her paternal siblings.

After 17 years in Vegas, the family returned to Sedona, where her husband became pastor of the Nazarene church his parents started in 1984, and Cindy continued homeschooling.

“We always wanted to move back to Sedona. It was interesting to see how much it had changed from that small cowboy town with only two stoplights!”

2010 brought drastic changes with a diagnosis of breast cancer. The kids went to public school and Cindy and her husband focused on her health.

“The community surrounded our family with love and support. It was amazing. They brought meals, helped clean the house, coordinated school and sports rides and so much more.” Cindy has been cancer free for six years and intends to stay that way.

Currently the Associate Pastor at VocNaz, Cindy’s pursuing ordination and will eventually co-pastor with her husband. Cindy stays busy with their “kids” (17, 19, 21, 24), work (the MISS Foundation), ministry (worship team, Bible study teacher, board member, mentor, counselor, student) and community service. Cindy is available to anyone who needs to talk; call her at 702-578-1388.