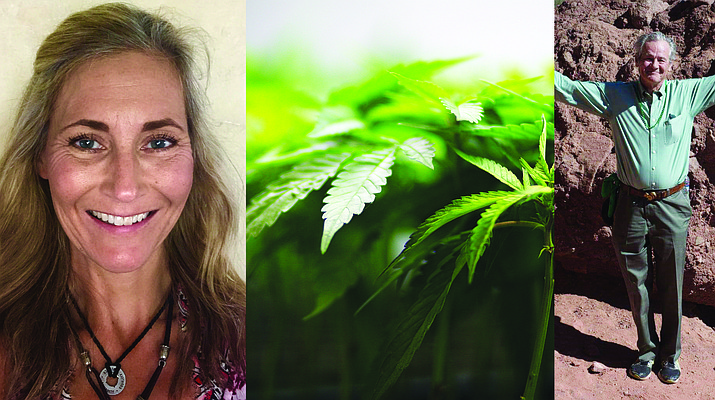 Since 2003, Lisa Olson (left) has had Multiple Sclerosis. Both sleep – and medical cannabis – she says help her keep the disease’s pain “at bay.” (Courtesy photo) Right, Don Ream Sr. has lost 35 pounds since making various lifestyle changes because of his degenerative back condition, including the use of medical cannabis instead of the five prescription meds he had been taking. (Courtesy photo)

Lisa Olson wasn’t born with Multiple Sclerosis. She also didn’t grow up thinking cannabis could be used for medicinal purposes.

In fact, the Phoenix-area resident didn’t think very highly at all of the plant. Until she decided that that pharmaceuticals were doing nothing to help her.

“I used to be on four prescription drugs to address my MS,” Olson said. “One of them was an anti-depressant, which is a common pharmaceutical accompaniment to the injection drug I took for the MS. Insomnia can be exacerbated by some of the MS medications, too, so I was on a prescription to deal with that, as well. Now I’m off of all of those.”

Now, and for the past two-plus years, the only medicine that Olson takes for her Multiple Sclerosis is cannabis.

When Olson began taking medicinal marijuana, it was the first time she “knowingly” consumed the drug.

“Once when I was 20 I ate a ‘pot’ brownie a friend offered me,” Olson said. “Only she didn’t tell me there was anything special about it.”

Olson said she neither drank nor smoked – anything – through college, her judgment she said was “compounded after working four summers as a cocktail waitress and witnessing people behave very badly.”

Looking back on her youth, Olson said she had an “unreasonable sense of judgment about drugs and alcohol.”

“And anyone who knew me back then would attest to this,” she said. “Square peg.”

Olson said she is fortunate that her condition qualifies under Arizona’s laws to have access to a medical marijuana card.

The most common form of MS, known as relapsing-remitting MS, is what Olson suffers from. “It can morph into the more severe version of chronic-progressive MS if attacks aren’t well-managed.”

Diagnosed in 2003, Olson said her first attack “landed me in a wheel chair, as I could not walk from one end of my street to the other.”

Her most recent “full-blown MS” attack was in 2007, when she dealt with optic neuritis and was temporarily blind in her right eye “while enduring excruciating pain in the orb of the eye.”

“The attack lasted several months,” she said. “Even with steroid treatment.”

Taking cannabis as a replacement for the prescription meds helps Olson “with my spasticity, insomnia, and general relaxation.”

Even if the recreational use of cannabis was to be legalized in Arizona, Olson said she is “not sure it would change” her habits.

In her lifetime work as a teacher, Olson said that she has “perpetuated the false narrative about marijuana with the DARE program.”

Nowadays, she is “doing everything I can to de-stigmatize the plant that has brought me and so many others healing.”

Olson is involved with an organization called MomForce, whose goal she said is “to teaching the truth about substance abuse and helping seniors find their way off of dangerous pharmaceuticals that can destroy organs or even kill the patient.”

Now secretary of MomForce, Olson first carried petitions as a volunteer for what became Proposition 205, the legalization of cannabis for medicinal purposes.

Since her involvement with MomForce, Olson has gotten to know fellow Phoenix-area resident Don Ream Sr., the organization’s vice president. Ream, suffering from degeneration of the spine, has had his medical marijuana card for the past seven years.

So for many years, he took his prescription meds. And remained in pain.

Even with medical cannabis, Ream still has pain. But it’s “way less.”

“I’m choosing to do something that’s healing,” Ream said. “I’m about a 1 (on a scale of 1 to 10). Very rarely am I pain-free. During the day I use very little cannabis, sometimes none.”

Not only has Ream been able to ween himself from the five prescription meds he was taking, but he also used to drink to mask the pain.

“I used to use alcohol in the evening,” Ream said. “I replaced alcohol with cannabis. Now I’m getting into my REM sleep quicker. Cannabis will get you there quicker.”

It’s not as simple as swapping out Western medicine for medical cannabis for either Olson or Ream.

A myriad of lifestyle changes were also necessary for the two Phoenix-area residents to fight their medical conditions.

He still smokes about a half-pack of cigarettes each days, and likes his fast food tacos every now and then. But Ream eats three sensible meals each day, and supplements his meals with fruit throughout the day. When he received his first medical marijuana card, Ream weighed 195 pounds. Today, only 160.

Though Olson has never had to watch her weight, proper rest is key for her health.

“Sleep is huge for keeping the pain at bay,” Olson said. “But so is the cannabis.”

Though two hours from MomForce’s Phoenix-area location, Verde Village’s Jesse Dowling serves on the organization’s board of directors.

The relative anonymity of being a medical cannabis user in the big city differs greatly from those who live in more rural communities. Dowling calls it the “small fish big pond, big fish small pond issue.”

“In the urban areas, there are just more patients and more options for employment and or community,” Dowling said. “Up here, employment options are far fewer and the community far less accepting. A choice to step out of the green closet by a patient up here can have negative consequences on their employers and even family members of patients.”

Part 3: In the final part of this series, Verde Valley Newspapers will interview at least one medical cannabis patient in the Verde Valley, and also discuss why patients in rural communities are less willing to go on the record.

Letter: Much for all to learn concerning legalized marijuana
Verde Valley residents discuss their health, use of medical cannabis
Living a ‘well-thy’ life: Before taking any medicine, know what you’re taking
Harvest Inc. CEO left law career to help people ‘alleviate pain’ with medical cannabis
Letter: Marijuana a gateway out of opioid addiction