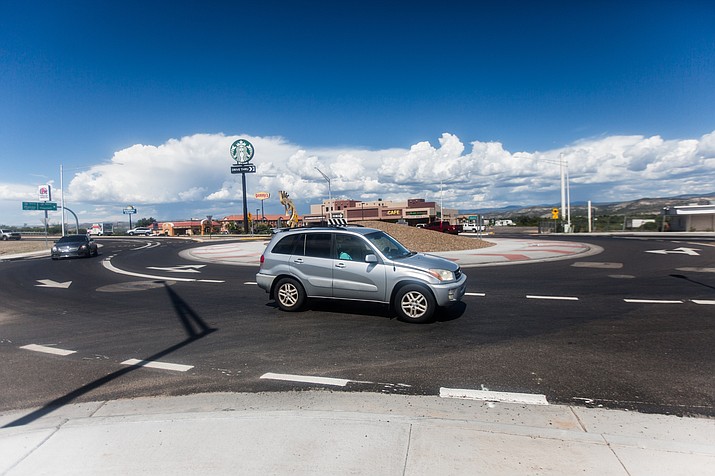 A car travels through an SR 260 roundabout in Camp Verde. They are often thought to be nuisances, however, statistics show that roundabouts are safer than a stoplight. (VVN/Halie Chavez)

CAMP VERDE – The construction of State Route 260’s seven roundabouts has been met with community opposition – roundabouts are often thought to be nuisances on an otherwise straight road. However, statistics show that roundabouts are actually safer than a stoplight.

Here are ADOT’s directions on how to drive around a roundabout:

Never merge. The right of way is observed at the yield sign. Motorists already in the roundabout have the right of way. You must slow down or stop to yield to traffic approaching from the left. Wait for a gap in traffic, then carefully proceed into the roundabout.

For right-hand turns, travel in the right-hand lane and use your turn signal.

For left-hand turns, travel in the left-hand lane and use your turn signal.

For continuing forward, remain in the same lane you entered.

For missed exits, circle around the roundabout again

For Camp Verde, the decision to implement roundabouts made the most sense to the Arizona Department of Transportation.

“[The main reason is] safety, because of the reduction of nefarious crashes. Also, maintaining a good level of service into the future. They also reduce congestion,” said Alvin Stump, Northwest District Engineer for ADOT.

“The tight circle of a roundabout forces drivers to slow down, and the most severe types of intersection crashes – right-angle, left-turn and head-on collisions – are unlikely,” the IIHS website says. They are also safer for pedestrians as crossing distances are relatively short and traffic speeds are lower.

As for the seven roundabouts in Camp Verde, another reasoning behind them pertains to planning for future development within the town.

“As we look at that 260 corridor, those seven intersections are expected to have significant development around them. Lights take more time,” Stump said.

Camp Verde Economic Developer Steve Ayers says roundabouts were a solution to issues SR 260 faced in 2003, by offering a way to direct traffic without congestion at several intersections.

“It was a question of engineering,” Ayers said. “If it had not been for the roundabouts, we would not have been able to build the road and provide access the town needed.”

According to IIHS, roundabouts will improve traffic flow compared to a traditional intersection. Less idling is better for the environment by reducing vehicle emissions and fuel consumption.

Maintenance for roundabouts is also less expensive – the service life of a roundabout is approximately 25 years, compared to 10 years for a typical signal, according to a 2010 National Cooperative Highway Research study.