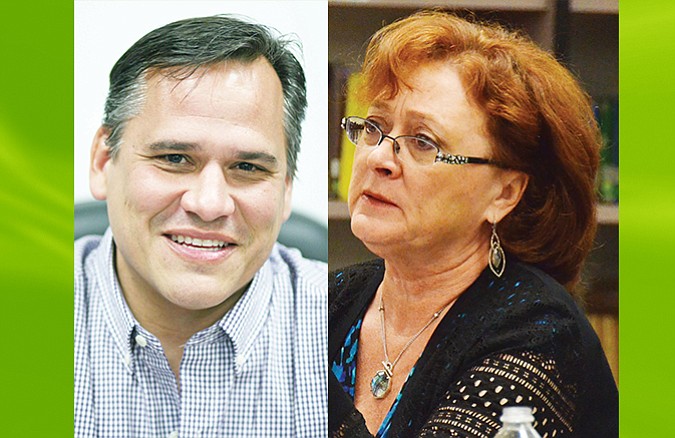 Jason Finger, left, “This would help to make two good districts into one great one for improved student achievement.” Anita Glazar, right, Anita Glazar: “It feels premature. I just don’t know what the rush is.” VVN/Bill Helm

COTTONWOOD – Though the Advisory Committee for Consolidation has met twice to compile and solicit facts pertaining to a possible marriage of Cottonwood-Oak Creek and Mingus Union school districts, COCSD Board President Jason Finger said that his board has the information it needs – and that it wants to take what it believes is the next step.

Tuesday, the Cottonwood-Oak Creek school board could officially declare intent to merge with Mingus Union, as well as request that Yavapai County School Superintendent Tim Carter call an election to allow the collective district voters to determine the consolidation question at a November 2018 election.

“Our board believes that this is a community-driven issue that is brought before the boards at this time, and based on the years of study that we have done regarding this item, that it merits going to the voters for their consideration,” Finger said”

Finger also said that he “does not see any significant issues at this time that we think would be harmful for students, and in fact think that this would help to make two good districts into one great one for improved student achievement.”

Just because the Cottonwood-Oak Creek board wants to move the debate forward doesn’t mean the job of the fact-finding committee is finished, Finger said.

“I don’t believe this changes our role in working with Mingus in working through the issues,” said Finger, who is also one of the consolidation committee’s two vice-chairpersons. “Considering concerns from, both sides of the issue, both districts still have a part to play in this discussion.”

As the committee’s other vice-chairperson, Mingus Union Board President Anita Glazar said she “wasn’t shocked” about Cottonwood-Oak Creek’s decision to agendize intent to consolidate/unify and ask for the item to go to election.

But she was “disappointed.”

“I respect anything they do to meet their objective,” Glazar said. “It doesn’t matter to me how they do what they do. But it feels premature. I just don’t know what the rush is.”

Speaking for herself, Glazar also said that the Mingus Union school board is “not ready” to take official merger support to vote.

“It’s complicated,” Glazar said. “It’s not an easy thing. We don’t have all the facts yet.”

At 5:30 p.m. Tuesday, Dec. 5, the Cottonwood-Oak Creek School District’s governing board will meet at the District Office, located at 1 N. Willard St. in Cottonwood.