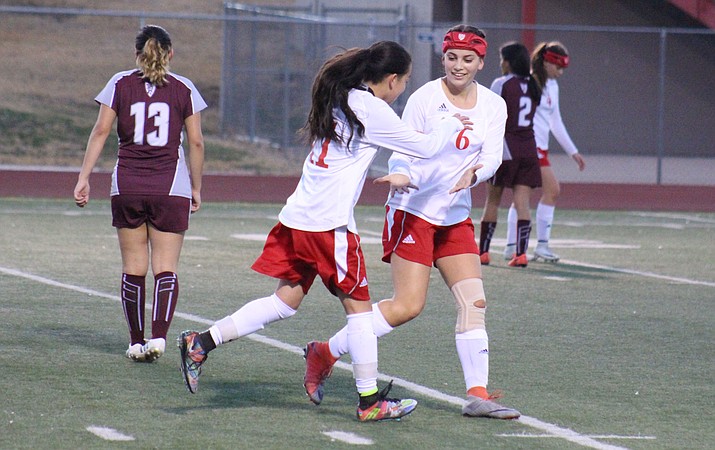 Mingus Union girls soccer rolled to a perfect start in the first four games of the season and into the championship game of the Desert Cup Classic.

On Friday night in their home opener, the Marauders (4-0) beat Phoenix Metro Tech 7-0.

Mingus freshman Jasmyn Sanchez goes for a loose ball during the Marauders’ 7-0 win over Metro Tech on Friday. (VVN/James Kelley)

“It’s hard to tell because of the quality that we’re playing against,” said Mingus head coach Joe Rongo, “but I’m really liking the passing combinations they’re getting, the drop balls we’re using, so we’re not just one dimensionally going forward, we’re spreading the field, the defenders are using the goalie as outlet passes. So it just seems like there’s a lot of soccer intelligence going on.”

With the 7-0 win, the Marauders have outscored opponents 24-2.

Already with a big lead going into the break, Mingus Union moved sophomore goalkeeper Zoey Arwine to forward in the second half.

“It was fun and it was fun working on the field, trying something new because I’ve been a goalie the last four or five years,” Arwine said.

Mingus started the week at the Desert Cup Classic in the Valley of the Sun. With three wins, two by shut out and scoring at least three goals in each game, the Marauders racked up 29 out of a possible 30 points in the tournament’s pool play.

The teams get six points for a win, one point per goal up to three and an extra point for getting a shut out. In the five groups across three divisions, only one team, Phoenix Arcadia, racked up more points than Mingus Union.

“We did amazing,” Arwine said. “I didn’t have much expectations for our team, like I was coming in with an open mind and seeing what was going to happen and we absolutely killed it.”

The Marauders earned a spot in the Division 2 championship game on Saturday against Phoenix Northwest Christian. Results were not available at press time.

“It’s amazing, I honestly didn’t think that was going to happen,” Arwine said about making the final.

Mingus junior Kaitlyn Card dribbles past a Knight during the Marauders’ 7-0 win over Metro Tech on Friday. (VVN/James Kelley)

Getting to the championship means the Marauders have games two days in a row and five days of out six.

“It’s tiring yeah but I love soccer, so it’s just going to be another opportunity to play again,” Arwine said.

Rongo said they brought JV players to the tournament to provide more rest and for them to get experienced, that they used a lot of ice, took ice baths and hot baths with Epsom salt and passed around the Flexall and Bengay on the bus.

He said Vargas is out a week to 10 days though after she took an elbow to the eye and broke a couple arteries.

“They’re sore, they’re tired and there was elements of this game that looked really sluggish and that’s just a sign of how tired and how hard they’re working,” Rongo said after the Metro Tech win.