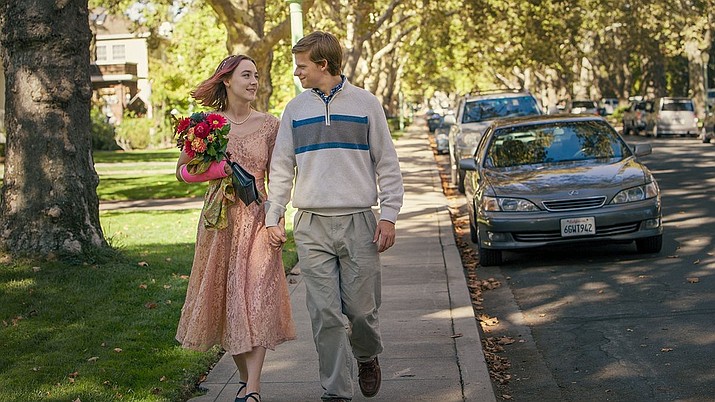 Lady Bird exposes the frustration in a teen girl’s life that is brilliantly written and superbly acted.

Greta Gerwig wrote the script for and directed this film. Lady Bird is the story of a teen age girl and the travails she experiences in her high school senior year.

She is Christine McPherson played to perfection by Saoirse Ronan. Christine has decided that she should be the one to assign a name to herself, and so we have her as Lady Bird. The story takes place in Sacramento. Christine has a strong dislike for the city and for California. She would like to go to an east coast college.

Lady Bird exhibits many typical traits that are common among teens. Her animosity toward her mother is not helped by her mother’s excessively domineering attitude. Mother, Marion (Laurie Metcalf), is a nurse who criticizes and corrects Christine about everything — from her clothes to her habits to the appearance of her room.

They argue constantly. Christine’s father, Larry (Tracy Letts), is much more understanding of his daughter’s adolescent personality and their relationship is close and warm.

Marion is opposed to Christine’s desire to go to a college far away, but Larry is supportive. The problem for Lady Bird is that money is very short and she has to apply for scholarships. The McPherson family is not well off. Their income depends mostly on nurse Marion’s salary. Larry is a computer systems worker who has been laid off and is unable to find another position.

In school, Lady Bird has several friends; she is not an unpopular girl. Her best friend, Julie (Beanie Feldstein), has problems because of her plump figure, but Lady Bird stays close to her.

Along the way, Lady Bird meets and gets involved with Danny, a classmate. Danny (Lucas Hedges) is taken by Lady Bird’s cute looks and personality.

They start a romance but it ends unhappily. Lady Bird takes up with another boy, Kyle (Timothée Chalamet), which also leads to an unpleasant breakup.

Graduation comes. Lady Bird gets a driver’s license and rejections from several colleges — except one. At the end of the film, Lady Bird, Christine is at school in New York and there is a touching scene of reconciliation between mother and daughter, 3,000 miles apart.

Lady Bird wants to show us the angst that teenagers have to deal with. Parents don’t always recognize and accept the cultural changes from generation to generation.

That ongoing generational conflict was well displayed in the film 20th Century Women (2017), in which Greta Gerwig played one of the lead characters. It is not hard to perceive that this story is at least partly based on Greta Gerwig’s own life.

In this film, we get to feel the frustration in the teen’s life. That is brilliantly written by Gerwig and superbly acted by Ronan.

My reservation is that the character of Christine’s mother is too overbearing in a relentless way. She believes she is guiding her daughter along the right path. There is no lack of love for her daughter, only a lack of understanding.

Saoirse Ronan follows her fine role in the film Brooklyn (2015) with this great performance. She is clearly an actress to follow in future performances.