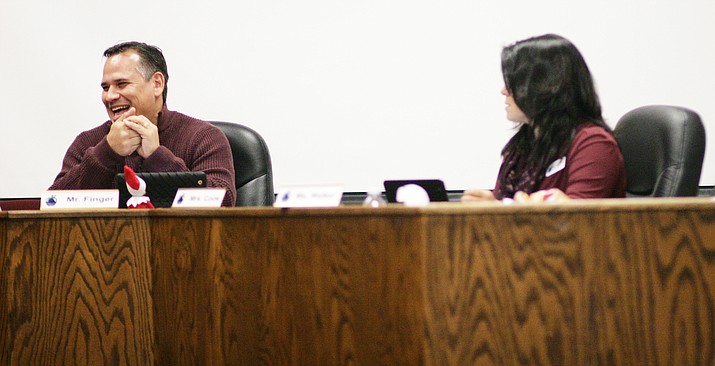 Tuesday, the Cottonwood-Oak Creek School District’s governing board voted 4-to-0 to notify Yavapai County School Superintendent Tim Carter of the district’s intent to consolidate with Mingus Union High School District as a single school district, and to respectfully request[s]” Carter to “call an election to allow the collective district voters to determine the consolidation question at a November 2018 election.” (Photo by Bill Helm)

COTTONWOOD – It’s not certain whether Mingus Union High School District’s governing board is interested in consolidating and unifying with the Cottonwood-Oak Creek School District.

But the Cottonwood-Oak Creek School Board voted 4-to-0 Tuesday that Mingus will have the final say-so in the year-long debate.

“The public brought this to us,” said Cottonwood-Oak Creek board member Mary Valenzuela. “It needs to go to the voters.”

As the Cottonwood-Oak Creek school board began discussing the possible action, Board President Jason Finger said that based on recent discussions, as well as consolidation committee meetings held since late-November, that “the [COCSD] board would like to see the issue go to the voters.”

Finger said that Tuesday’s vote “sends a message to the community.”

‘They’re all our students’

Groseta has said that financial savings by eliminating redundancies would lead to money that could go back to the classrooms, reasons he said the two districts should become one district.

Leading to Tuesday’s vote, Cottonwood-Oak Creek board’s vice president said that it’s time for the community to “look at a new [educational] model.”

“They’re all our students,” JoAnne Cook said. “We’re all educating the same pool of kids. We care what happens to them once they move onto Mingus.”

The board’s unanimous vote Tuesday means that it will notify Yavapai County School Superintendent Tim Carter of the district’s intent to consolidate with Mingus Union High School District as a single school district.

According to the Tuesday agenda item, the COCSD board “respectfully request[s]” Carter to “call an election to allow the collective district voters to determine the consolidation question at a November 2018 election.”

For the unification/consolidation matter to be decided at the Nov. 2018 election, it will need to be on the ballot by June 30.

By that time, either Mingus Union’s school board will need to vote to support the merger, or should the Mingus board not vote to merge – or vote against the merger – then the public will need to petition the merger and collect signatures from the public.

Groseta said that his group has considered petitioning for signatures, but that it is “premature at this time to make a statement regarding that.”

Besides his group, Groseta says he believes “there are some folks in the community who want to pursue the petition alternative.”

“However, we want to allow both boards the time to do their due diligence, and the COC Board decided that they have conducted their due diligence and have reviewed enough information which led them to make their decision [Tuesday],” Groseta said. “We are hoping that the Mingus Board will make the same decision sooner than later to provide an opportunity for the community to vote on this important matter in November, 2018.”

Phil Terbell, a member of the Advisory Committee for Consolidation and a supporter of Groseta’s effort for consolidation and unification of the two districts, said that if the consolidation committee “can’t reach a conclusion quickly, then I would hope that group would consider the petition drive a little harder.”