Despite vote to support merger, Cottonwood-Oak Creek continues to participate in consolidation committee 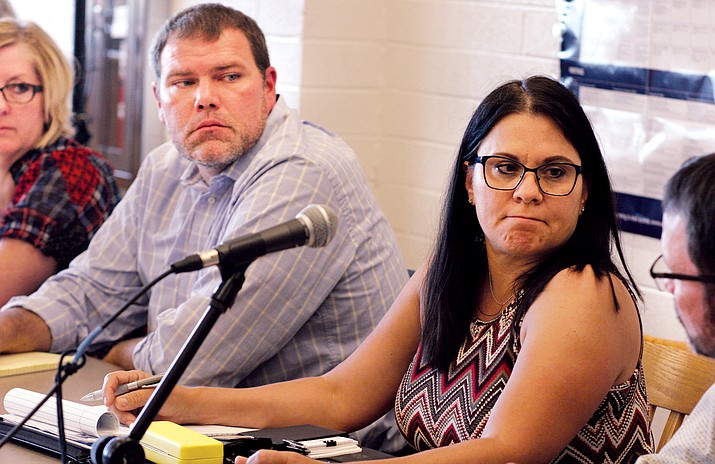 With Cottonwood-Oak Creek school board’s 4-to-0 vote Tuesday to support consolidation of its district with Mingus Union, COCSD board president and consolidation committee member JoAnne Cook says that the committee “needs to stay focused on what is best for students, and continue to provide information/facts to help the MUHS Board decide if they will join us in our efforts.” (Photo by Bill Helm)

COTTONWOOD – Just because the Cottonwood-Oak Creek school board voted Tuesday to support efforts to both consolidate and unify its district with Mingus Union doesn’t mean that the Advisory Committee for Consolidation has nothing left to accomplish.

According to Consolidation Committee Chairman Dan Mabery, Cottonwood-Oak Creek’s decision Tuesday “[doesn’t] change anything at all.”

“We knew all along that this would probably be the position of COCSD,” Mabery said. “Since it was understood that COCSD would probably go in this direction and that, for now, MUHS was not necessarily on the same page, our discussions and potential outcomes would be for the benefit of the voters and the MUHS governing board.”

According to committee co-chair Anita Glazar, there are still plenty of information to solicit, and to disseminate to the board members.

“We’ve worked hard at getting information,” said Glazar, who also serves as board president for the Mingus Union High School District. “For us, we’re still on a fact-finding mission.”

With Linda Walker absent, Cottonwood-Oak Creek school board members voted 4-to-0 Tuesday that they had enough information to go on and they were ready to move forward with consolidation and unification with Mingus Union.

Consolidation/unification community advocate and former Mingus Union school board member Andy Groseta said Wednesday that he “want[s] to thank the COC School Board for giving the community the opportunity to vote on this important matter.”

Moving forward, Cottonwood-Oak Creek school board president JoAnne Cook said that the consolidation committee “needs to stay focused on what is best for students, and continue to provide information/facts to help the MUHS Board decide if they will join us in our efforts to let the community speak on this matter by voting in the November 2018 Election.”

At 4 p.m. Dec. 12 at Mingus Union High School’s library, the consolidation committee will hold its first meeting since the COCSD board held its vote to support a merger of the two districts.

Mingus Union school board member and Consolidation committee member Steve Gesell said that though he “certainly respect[s] the COC board’s decision, there seemed to be consensus from a number of committee members [at the Nov. 28 meeting] that they were interested in gaining a better understanding of the financial implications that have potential impacts to our students as well as the community.”

“I personally believe the purpose of this committee is to clear up the complexities involved in the event consolidation goes on the ballot to give voters the best data we can to aid them in making a personal decision,” said Gesell, who also serves on the Mingus Union School Board.

“At the end of the last meeting, a committee member commented the discussion had generated more questions than answers for him,” Gesell said. “This is just one indicator that we have not completed our objective. I would think at least one more meeting would be in order to understand the rationale of the COC Board, as it’s certainly possible it may make sense to the committee; most of which are teachers and community members that were asked to be part of the discussion.”