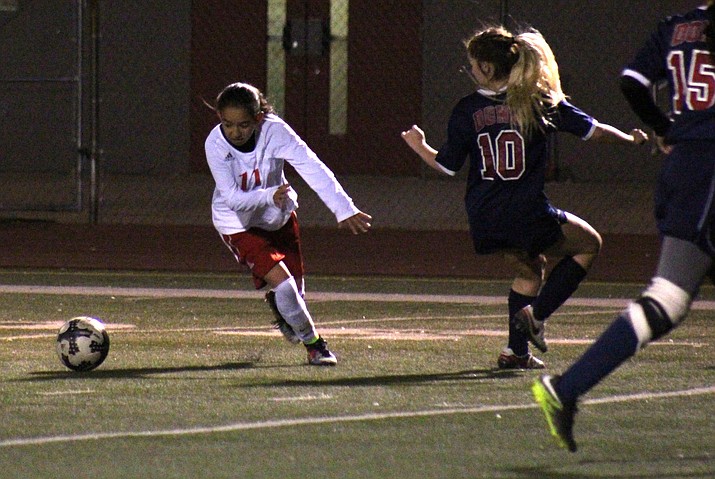 Mingus sophomore Marli Urueta evades a Don defender during the Marauders’ 2-1 loss to Coronado on Friday night at home. Urueta has 14 goals in the first two weeks of the season. (VVN/James Kelley)

Mingus Union girls soccer’s busy early schedule may have caught up with them in their two straight losses.

On Friday at home the short-handed Marauders (4-3-1) lost 2-1 to Scottsdale Coronado after giving up two goals in the second half. It was their second game in a row, third of the week and their eighth game in the first two weeks of the season.

“I thought that the girls played with a lot of heart and good ball movement, we’re just so exhausted,” said Mingus head coach Joe Rongo. “The team we played (Thursday) had only played three games, this team we played, this is their fourth game and we’ve already got like 10 under our belt in the last 12 days or so and so the girls are just beat and tired.”

It was Urueta’s 14th goal so far this year.

“Marli’s goal was beautiful,” Rongo said. “There was a couple of calls that I’d argue but all coaches want to have the calls. There was an early foul in the box on Marli that I thought should have been called and they didn’t and there was a hand ball in the box that they didn’t call. It was a tough fought game, it could have gone either way.” 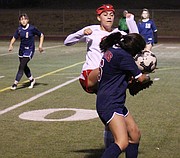 Mingus sophomore Felicia Bueno fights for the ball during the Marauders’ 2-1 loss to Coronado on Friday night at home. (VVN/James Kelley)

Sophomore goalkeeper Zoey Arwine returned to action on Friday to pick up a bunch of saves. She had to leave the game on Thursday in the first half after she hyperextended two fingers.

“She had about 10 saves, some of them just phenomenal saves,” Rongo said. “She’s a work horse.”

“It was a game of inches,” Rongo said. “We hit the post, we were hitting cross bars. By the end, again, the girls were just dragging. We had another injury (Thursday), it seems like every game. Like (Friday) by the end I couldn’t even sub anyone on the bench. People have twisted ankles, black eyes, concussions, we were pretty beat (laughs).”

On Tuesday they traveled to Buckeye Youngker and tied the Roughriders 3-3 a few days after beating them 9-0. Altamirano, Urueta and senior Isabella Dalu scored.

Since the game was tied after regulation, it meant they had to play overtime, adding more minutes to the Marauders’ schedule.

Mingus Union’s next game is on Monday when they host Goodyear Estrella Foothills at 5 p.m. they also host Mohave on Saturday and then travel to Lee Williams on Dec. 18 before their winter break.

“Another one on Monday and then it kinda backs off ‘til the following Saturday,” Rongo said. “It would be nice to rest them but we’re coming up to Christmas break, so we’ll probably work straight up to the break and then take the two weeks off just to heal.”