Sergeant Brian O’Connor, a 2012 graduate of Mingus Union High School, has served in the Air Force for more than five years. 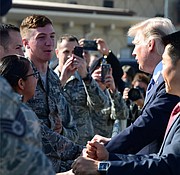 He is a staff sergeant currently stationed in Pyeongtaek, South Korea. O’Connor is part of the welcoming and farewell team at Osan air base – the team greeted President Donald J. Trump during his visit on Nov. 7. “I love being a part of something bigger than myself,” O’Connor said. “It was an honor to meet the president and the first lady.”