Mingus Union athletes of the week: Garcia and Ontiveros shore up midfield and defense for Mingus 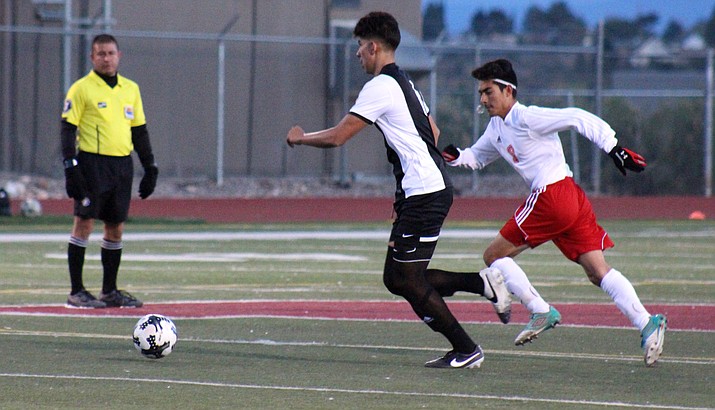 Mingus Union boys soccer has already equaled its win total from last year and a junior and senior have played a big role in that start.

“I had two players that stepped up extreme,” Behlow said.

While the Marauders are loaded with central midfielders, so much so that they are being played in other positions, Garcia has remained a constant there.

“I think the biggest thing I can say about Jovany is that last year he had another true center mid in Devyn Spitzke and this year with the plug and play soccer, I’ve got guys like Eric Samono, Kevin Ornelas, Angel De La Cruz, Jordan Finger,” Behlow said. “I’m putting four or five different guys out there, Jovany’s the only consistent player that we’re playing there. He comes up big. He communicates on the field, he controls the ball well, when we need that possession to be maintained he’s there.”

Ontiveros, nicknamed JuJu, is playing on varsity for the third year and was All-Section his sophomore year.

“JuJu I’ve been coaching him since he was three years old,” Behlow said. “He’s always been defensive minded and he always puts himself in a good position to play defense, bar none and he just has really done that well for us this year. He almost always because he’s so small, almost always draws their best striker who thinks ‘yeah, we’ll go to the smallest guy’ and he just puts himself in such great position, always goalside, communicates in the back, he’s definitely holding it down.

Garcia said they won those two games because they passed the ball well and they should even be 3-1-0. He also said the success gives them confidence and they’re more of a complete team now.

“I feel like it’s been going good I think we have a good midfield,: Garcia said.

Before the season Behlow said Garcia was the most skilled player on the team. Garcia credits hard work, his coaches and his father for that.

He hopes to play college soccer and it’s a sport he’s played his “whole life.”

While Garcia has remained a constant at center mid, Ontiveros has shifted to outside defense from center back.

He said he likes the change.

Ontiveros said his uncle, Behlow, got him into soccer and has been coaching him ever since.

With Garcia and Ontiveros, the Marauders are seeking their first playoff berth since 2015.

“I can’t say anything bad about either of those players, they just come out here and give it their all every practice and every game and they just truly love the game,” Behlow said.