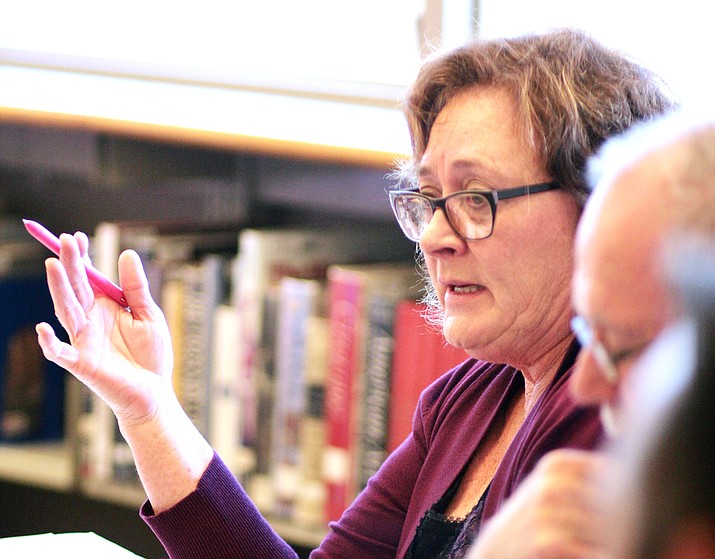 Mingus Union High School board president and consolidation committee member Anita Glazar said Tuesday that she has a “moral, ethical” issue with merging her district with Cottonwood-Oak Creek and, in effect, forcing Clarkdale-Jerome district students to pay tuition to attend Mingus Union. (Photo by Bill Helm)

COTTONWOOD – If the community says yes, then it’s yes. If it says no, then it’s no.

Though the function of the Advisory Committee for Consolidation is to solicit and disseminate facts relating to a possible merger of the two districts, Mingus Union representatives spent the bulk of Tuesday’s meeting taking issue with the C-OC board’s recent vote.

Mabery also said that the Cottonwood-Oak Creek board’s 4-to-0 vote “changes nothing.”

“Everyone knew this was their position when we started this process,” Mabery said. “If this process showed that the consolidation was not a positive move for our children, I think they would reconsider. Remember, as I understand it, the decision was to move it to a vote.”

For Anita Glazar, it’s a “moral, ethical thing” about a two-district merger that would leave Clarkdale-Jerome School District paying tuition to send its kids to high school.

This is one reason why Glazar has argued that the 2011 Warner Report is not the most up-to-date information. The report was written based on the consolidation and unification of the three districts.

On May 9, the Clarkdale-Jerome school board agreed that they collectively were not interested in talks to become part of a larger district.

Knowledge of both sides

Asked by Mingus Union board members to join the committee because of her knowledge of both COCSD and MUHSD, the Cottonwood resident is “pro-consolidation/unification.”

“However, I feel very strongly that we have an obligation to research, analyze, and communicate accurate information related to the benefits and challenges of this potential merger,” DeWitt said. “We need to be certain that, given the current realities of both districts, now is the right time to merge.”

At 4 p.m. Jan. 9 at Mingus Union High School’s library, the consolidation committee will hold its next meeting.

At this time, the committee hasn’t confirmed its agenda, nor what it will be charged with researching in the interim.

Between now and Jan. 9, consolidation committee chairperson Dan Mabery will discuss with committee co-chairpersons Anita Glazar and Jason Finger “how to approach the next meeting.”

Finger agreed that the committee “did not leave the last meeting with a clear direction for our next meeting.”