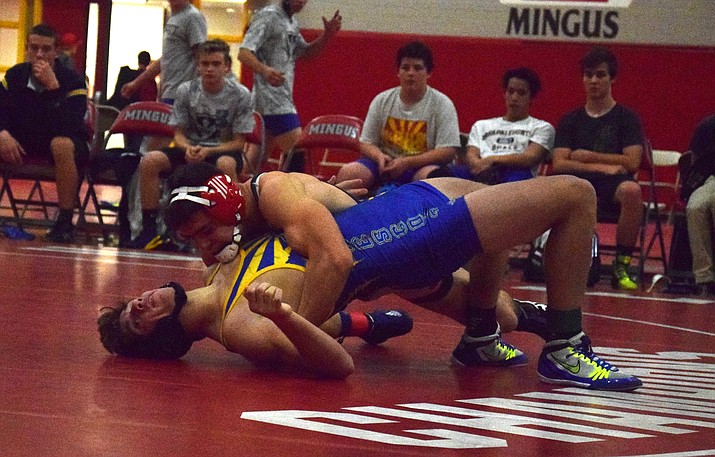 Mingus senior Lucas Svoboda goes for a pin againt Prescott on Wednesday night at home. The Marauders beat Mayer and Blue Ridge but lost to the Badgers. (VVN/James Kelley)

Mingus Union wrestling went 2-1 in their last home duals of the season and showed flashes of classic Marauder wrestling prestige.

The showing reminded Mingus head coach Klint McKean, who won a state championship, of the Marauders squads of old.

“I was really proud of our kids’ performance I told them they’re starting to bring back the Mingus toughness and what it means to be a Mingus wrestler,” McKean said. “Our JV wrestlers and freshmen wrestlers looked really strong, most of them won their matches.”

Although Prescott rolled to the Yavapai County championship earlier in the season, McKean said the goal on Wednesday night was to knock off the Badgers, who bested the Marauders at the Yavapai tournament.

“We wrestled a closer dual against Prescott than we did at the beginning of the year,” McKean said. “We were right there with them, if we get one or two different matches swinging the other way, I think we win that dual and so we felt good about our performance but not satisfied with going 2-1, really thought we could go 3-0 and that was our goal (Wednesday) but we’re happy.”

McKean said Sharaden Stephens, who was wrestling at 182 pounds, was a pleasant surprise on Wednesday.

“He had a really good match (Wednesday) against an athletic Prescott wrestler and he really showed heart in that he was about to get turned a couple times and a lesser wrestler would have just rolled over but he fought hard and got the win,” McKean said.

“So he was wrestling up a weight class and he beat a solid wrestler for Prescott,” McKean said.

The duals were also senior night for the Marauders. They have three senior wrestlers, Lucas Svoboda (145 pounds), Nick Doerksen (160) and Ray Martinez (182) who were honored, along with three year manager Ashlyn Wingfield.

“We had a lot more enthusiasm going into these matches than we ever had before,” Doerksen said. “I really enjoyed it, it was my last matches at home and I wrestled pretty well, I could’ve done a little better on some technical things but overall I’m pleased with how I did.”

Svoboda finished at State last year and was honored as Mingus Union’s male athlete of the month for November at the board meeting on Tuesday.

McKean said Doerksen has a “great chance to get on the podium this year” and that Martinez also impressed.

“He wrestled a tough match (Wednesday),” McKean said about Martinez.

Up next for the Cowboys is the Veterans Memorial Invitational at Window Rock this weekend. The tournament features 28 teams and the headliner is Tucson Sunnyside, who has won 25 state championships since 1985.

The tournament features teams from all across the state, New Mexico and Nevada.

“I’m excited for it, there’s a ton of teams, good competitors and I’m really excited about how our individuals do and our team does,” Doerksen said. “I’m hoping to place pretty high, that’s my goal.”