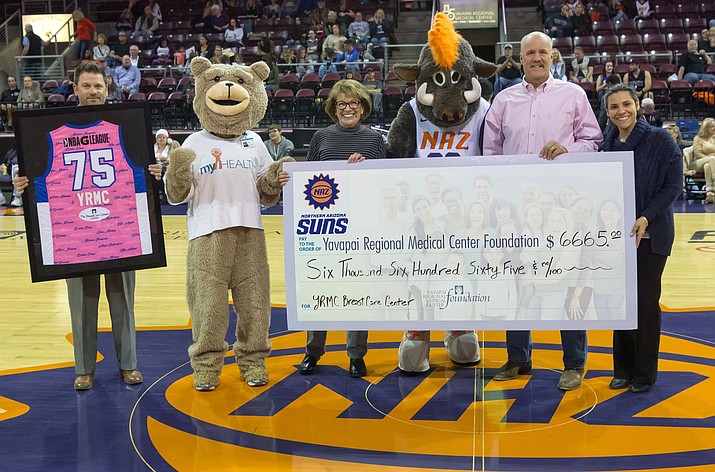 On Sunday night the Northern Arizona Suns presented a $6,665 check to the Yavapai Regional Medical Center Foundation to support their fight against breast cancer.

At half time of the Suns’ game against the Westchester Knicks, NAZ officials presented the check, which was raised on their annual Breast Cancer Awareness Night on Nov. 11. After that game the Suns auctioned off special pink jerseys signed by the players.

According to the Suns all proceeds from the auction went to the YRMC Foundation.

“We can’t thank our fans enough for the generosity they displayed during our annual Breast Cancer Awareness Night,” Presson said in a press release. “Not only will the money raised go to breast cancer awareness programs in the community, but the customized jerseys with names of people affected by breast cancer provided a reminder that too many of our loved ones have had to deal with this terrible disease. Now YRMC will have greater resources to provide better care to the affected parties.”

This season in addition to raising more money, the Suns offered cans the chance to submit names of people who were affected by breast cancer. The names appeared on the jerseys.

Highlights of the Breast Cancer Awareness Night were featured during the broadcast of the Suns’ game at the Greensboro Swarm on Nov. 30.