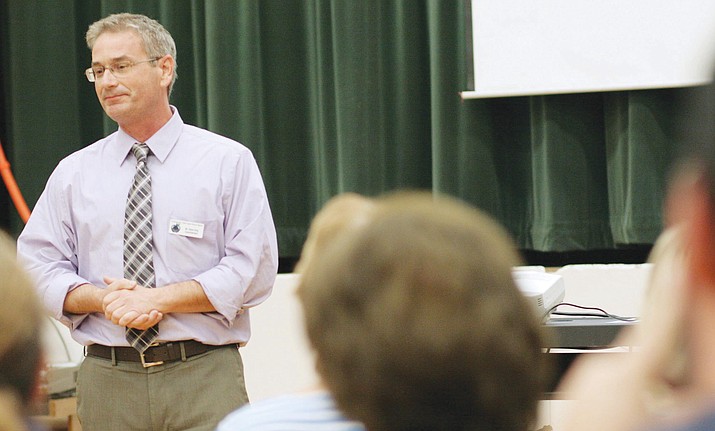 None of the three principals affected will lose their jobs – and none of them will be demoted.

But two of them, Dr. Daniel Bright’s Nancy Erickson and Cottonwood Elementary’s Jessica Vocca, would share the principalship at one of the schools.

Erickson and Vocca “both have their own unique, strong talents that they bring to the table,” said C-OC Superintendent Steve King.

At one of the schools, co-principals Erickson and Vocca would be joined by Title I coordinator Nicole Barrier. As King has decided on three-person leadership teams for each of the two schools, the other school would be led by Cottonwood Middle School principal Matt Schumacher, assistant principal Heather Whacker and Title I coordinator Shelly Zale.

Erickson, Schumacher and Vocca have “earned [their principalship] due to their long-term and exceptional service,” King said.

With Erickson and Vocca “working in concert, we are confident we can make that model work if we move forward.”

King says that he and his administration are still in the “preliminary stage” of studies to determine whether the district should consolidate the three schools into two K-8 schools.

From the first public meeting held in November, King has told the community that creating more family-friendly schools and maximizing space are reasons why the district is considering the change.

“We are a large, geographic-area district,” King said. “That’s why the K-8 district is more about families going to school together.”

At this time, the Cottonwood-Oak Creek School District’s Dec. 13 public meeting to discuss the possible merger of the three schools was the last of 2017.

The district’s Parent Advisory Committee is also not scheduled to meet again in 2017, according to committee member Jak Teel.

“As of now, I do not believe there is a set date and time for the next parent advisory committee meeting,” Teel said. “There was discussion that we would like to meet at least one additional time prior to the winter break, but nothing confirmed as of now.”

Wednesday, King presented information “as it pertains to the clusters of kids and where they are located in reference to their home school, as well as a quick outline of the expected boundaries under this proposal,” Teel said.