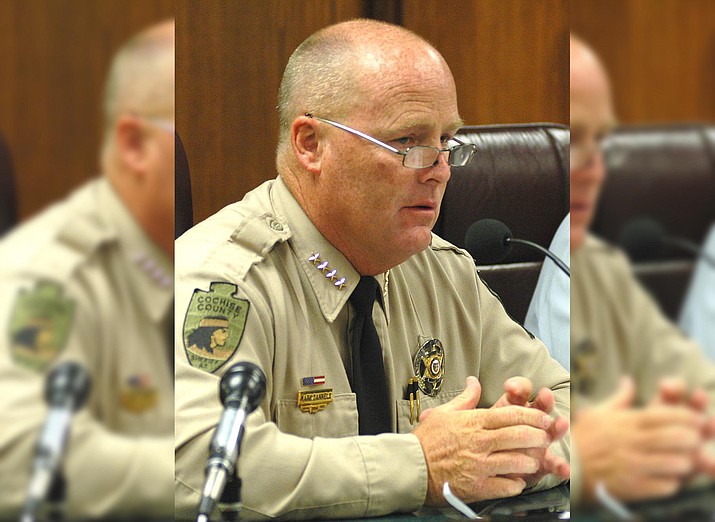 PHOENIX -- Unable to build the border fence they wanted with private donations -- or even come close -- a special legislative panel disbanded itself, giving out the remaining cash raised to the Cochise County Sheriff’s Department.

Sheriff Mark Dannels said the lion’s share of the $55,634 will be used to buy 30 special cameras that can be placed within three miles of the international border to send live still and video feeds by cell phone to deputies. This would supplement the 50 cameras the department bought after getting nearly $200,000 from the Joint Border Security Advisory Committee two years ago.

There’s also another $3,000 for antennas as well as “rodent shields’’ to protect the cameras. And the balance of the cash is divided up among other equipment the department says it needs, including binocular and some hand-held GPS position finders.

The decision comes six years after lawmakers, with great fanfare, announced plans to set up a web site to solicit donations nationwide to have Arizona build its own fence on private property because of the failure of the federal government to secure the border. Backers said they hoped to raise at least $50 million.

There was an initial crunch of sorts, with Sen. Steve Smith, R-Maricopa, saying donations came in to the web site from all 50 states.

But the total cash raised fell far short. So the committee, which consists of law enforcement officials and legislators, opted to ask border sheriffs for proposals to spend the cash.

But Smith, a candidate for congress, said he did not consider the whole effort a waste of time, if only for public relations purposes.

“It was to do nothing other than shame the federal government into doing their job,’’ he said. “We had no delusion that this was supposed to be the cure-all.

That, however, is not what proponents said when they set up the fund.

During hearings in 2011, lawmakers were told the kind of pedestrian-proof fence that Smith was proposing could run upward of $7 million a mile. Even Smith conceded the price tag could approach $3 million a mile.

But Smith insisted at the time there were ways to save money, including the use of inmate labor and getting suppliers to donate materials or, at least, sell them to the state at cost.

On Tuesday, the committee heard the results of the money it decided instead to give to Cochise County.

Thad Smith, the county’s chief deputy, said the way law enforcement kept an eye on the border before the first grant was with forward-looking radar and night vision technology.

He said that worked well while drug runners were operating at night. But Deputy Smith said they shifted their operations to the daytime, meaning the smugglers could see law enforcement personnel as well as they could see the smugglers.

“It took away our advantage,’’ he told the committee.

That’s where those $900 BuckEye wireless cameras come in. Developed for both hunting and security, Deputy Smith said they could be set up in remote areas and left unattended, sending images to law enforcement as they spotted something.

The existing cameras were set up along a 14-mile stretch of the border, centered around the San Pedro River, up to three miles away from the line. Deputy Smith said this is prime smuggling area given the proximity of State Route 92: Once smugglers get to the road, drivers can quickly disappear into Sierra Vista or Bisbee.

Those cameras, he said, resulted in pictures of 62 drug mules since the beginning of 2017. That led to 37 felony drug arrests, all resulting in convictions, as well as the seizure of just short of 4,000 pounds of marijuana.

Dannels, in his formal request to the panel, said he appreciates the work done by the Border Patrol which has installed a combination of a physical and virtual fence to deter illegal entry.

“Unfortunately, while getting better, the Border Patrol still doesn’t have control of the border, which means human and drug trafficking is an ongoing problem in Cochise County,’’ the sheriff wrote.

Deputy Smith said the cameras have made all the difference.

“Only because of the BuckEye system being placed in the locations where they were, were we able to, one, detect them, two, apprehend them, and three, actually get the cartel and the drug smugglers out of their comfort zones that they have been enjoying for some time,’’ he said.

In fact, he told the committee, he’d love to have three or four times as many cameras as the available funds will allow.

Senator Smith said he maintains that the federal government is “truly derelict’’ in its duties to protect the country. And he said if any proof is needed it is the number of people Cochise County deputies arrested.

“All of these people got past Border Patrol,’’ the senator said.