Graham cracker village ‘both messy and festive’
Beaver Creek first graders learn about community, then build one with sweet treats 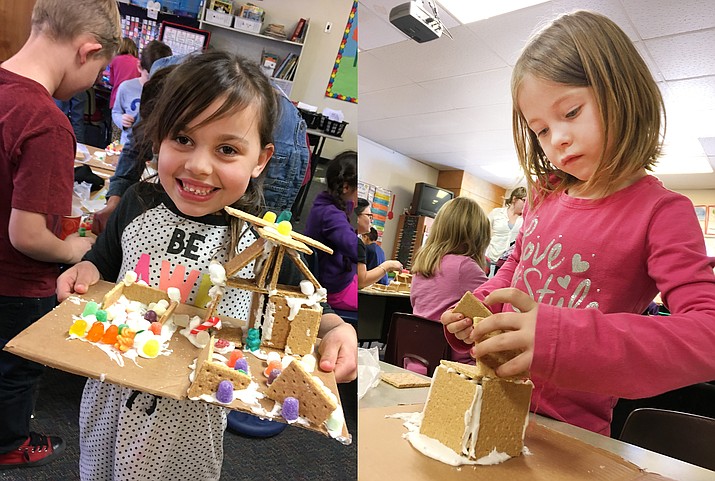 Tuesday, first graders at Beaver Creek School, along with parents and school aides, built a community with graham crackers and various candies. (Photo by Bill Helm)

The class project was a culmination of its studies on communities, as the children have learned that there are different jobs for different people, and how each job helps meet a community’s wants and needs.

Goepfrich taught her class about the spending and saving of money, as well as goods, services and occupations.

From gas station to fire station to police station, movie theater to library to ice cream parlor, military base to hospital to clinic, children each selected an integral part of their dream community and put together a short report on what that place provides to its community.

Goepfrich’s class also incorporated science last week by doing an experiment to see which type of frosting would be the best one to use for constructing their graham cracker structures.

The class decided that confectioner’s sugar made for the best frosting, as well as the best glue to hold the buildings to their base.

With the help of parents, school aides and eighth grade students, children built their village with eight boxes of graham crackers, two bags of jelly beans, one bag of M&Ms, 100 peppermint candies, three bags of Twizzlers, four pounds of spice drops, one bag of mini marshmallows – and 12 pounds of confectioner’s sugar.

Before her class built its village, Goepfrich said it would be “both messy and festive.”

Thursday, the class officially unveiled its graham cracker community in an open house for some of the other classes to see the village and to learn about the different goods and services in the magical, mystical community.