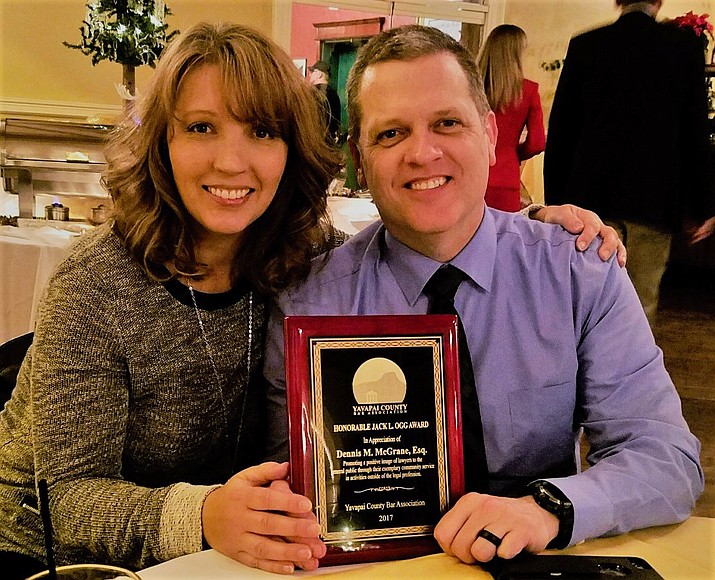 This award is given out annually by the County Bar Association to honor the memory of Jack Ogg, a long-time resident of Prescott and a well-respected attorney and judge, who passed away in 2011.

The award was given to Dennis McGrane in recognition of his ongoing military service with Arizona National Guard. McGrane has worked in the County Attorney’s Office for the last 23 years, first as a prosecutor and then as the chief deputy since 2001.

In addition to juggling a myriad of responsibilities while managing a large law office, McGrane was accepted into the Arizona National Guard in 2008 as a JAG officer, achieving his lifelong dream of military service for our country.

In introducing McGrane at the event, Yavapai County Attorney Sheila Polk noted his long hours of work, and his dedication and service to our country. “It is very fitting that this year’s Jack Ogg award is specifically recognizing someone for his military service. Jack Ogg, the man whose memory we honor every year with this award, served in the U.S. Army’s 16th Armored Cavalry, fought in Europe during World War II, earned the Purple Heart after being wounded in action twice, was a prisoner of war in Germany, and later escaped.”

Polk concluded her comments by noting that for McGrane, his Army Guard duty is more than service; it is an honor. “When in uniform,” said Polk, “members of the public will often thank Dennis for his service. How does he respond? Dennis responds by saying: “It’s my privilege.”

Yavapai County prosecutors win three state awards
Durrer named Arizona 'Paralegal of the Year'
Sheriff’s ‘Reach Out’ program gets $224,290 boost thanks to efforts by county attorney
No charges will be filed in bicyclist's death
Charges dropped in teen rape case