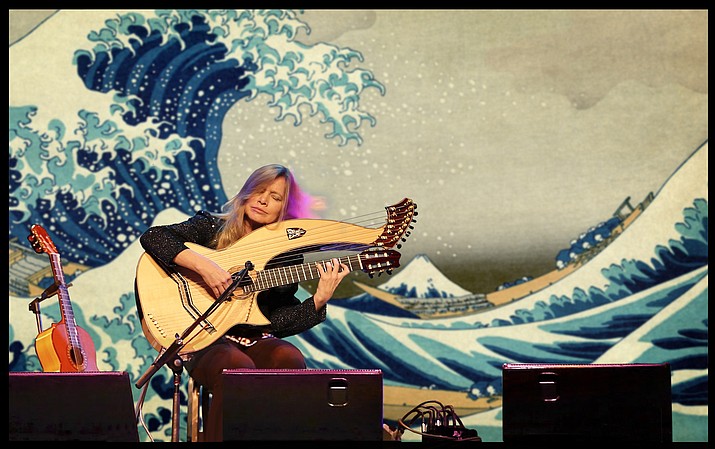 The Old Town Center for the Arts is pleased to announce a preview of some of the upcoming performances for the Spring 2018 season. International, regional and local talent will highlight OTCA’s 10th year of presenting music, theater, comedy, art, entertainment and cultural events.

OTCA has the distinction of completing nine previous seasons, hosting close to 500 events drawing performing artists from every continent except Antarctica, Besides adding to the cultural and entertainment scene of Old Town, OTCA has also produced and hosted many community events devoted to education and sustainability.

“Hard to believe this will be our 10th season,” Co-director William Eaton remarked. “It’s always a thrill to see audiences transported through theater, live music, and comedy. Along with the performers, our volunteers and technical staff work hard to make every event a memorable and enjoyable experience.”

Here are a few highlights of the coming Spring 2018 season:

Maybe not your standard bluegrass lyric, but a line known by all the world from the biggest rock opera of all time, The Who’s Tommy.  45 years after its original release, this classic of classic rock has now been fully realized as a full length bluegrass tribute featuring Springfield, Missouri’s The HillBenders.  Conceived and produced by SXSW co-founder and longtime musician/producer Louis Jay Meyers, this Bluegrass Opry brings a new perspective to Tommy while paying total respect to its creators.

Don was just nominated for Instrumental Solo Artist of the Year by the Canadian Folk Music Awards. He is also a two time National Fingerpick Champion. Ross’ advanced technique and his sure feeling for rhythm combine with uncommon ideas to make his style instantly recognizable. He often uses percussive techniques and plays intricate down and upstroke patterns with his thumb. These techniques have found their way into the toolboxes of many competitive fingerstyle guitarists.

One of the world’s foremost fingerstyle guitarists and harp-guitarists, Muriel Anderson is the first woman to have won the National Fingerstyle Guitar Championship. Currently named by Guitar World as one of 8 amazing female acoustic players, Muriel Anderson is one of the few international touring harp-guitarists. Her obvious joy of music, humor and her facility across the genres of folk, classical, jazz, bluegrass and international music is revered by guitarists worldwide. Muriel’s “Wonderlust” concert is a virtual tour around the world in music and imagery.

For more than two decades, Michael Gulezian has unpretentiously walked onstage and delivered one riveting performance after another. Michael fully displays the intensity, nuance, energy, and emotion of a master musician lovingly engaged with his audience in the mystery of self-revelation, creating music of understated virtuosity, atmospheric power, ecstatic joy, and haunting beauty. For this special evening, Anthony Mazzella will also perform solo guitar. Anthony Mazzella is one of the most virtuosic and passionate guitar players in the world today. His performance career began in New York at Manhattan’s Café Wah, Birdland, CBGB’s and the famous Blue Note, and he has spent years touring the U.S. and world stages as a soloist and as the concert guitarist for world music master Omar Faruk Tekbilek. Anthony’s original guitar music is composed with a fusion of world influences consisting of acoustic and electric finger-style, classical, flamenco, jazz, funk, R&B, Celtic, ambient, rock, medieval & near-eastern styles.

Performer, composer and Windham Hill favorite Sean Harkness brings his guitar mastery back to Arizona for an evening of powerful, evocative music. Enjoy the signature sound of this remarkable artist, and the stories he tells through song. Mr. Harkness is a first-call guitarist who compliments an exhaustive client list of artists, instrumentalists, Broadway productions, and corporations nationally and internationally.

This year’s celebration of the blues will feature a reunion of the legendary Los Angeles blues band, Blues Dawg, a later version of which has performed throughout Arizona for over a decade, under the guidance of local bluesman, Joe Neri. Also performing at the Old Town Blues Fest will be the Phoenix-based Mojo Rats. Mojo Rats, fronted by singer/guitarist Bob Vincent, blew the roof off of the Old Town Center for the Arts two years ago and are returning by popular demand. They are the #1 biker band in the Valley of the Sun and know how to rock the blues with their musicianship and stage presence, as well as their dedication to the blues masters of the past.

Mark your calendars, get your tickets, and join us for these and other upcoming events at Old Town Center for the Arts. For ticket information and to learn more about the concerts, classes at Studio B and community events at OTCA please visit www.oldtowncenter.org. Tickets are available online at www.showtix4u.com, in Cottonwood at Desert Dancer and Mount Hope Natural Foods; and in Sedona at the Sedona Activity Center. Old Town Center for the Arts is located at 5th Street & Main in Old Town Cottonwood. For more information please visit oldtowncenter.org or call Elena Bullard at 928.634.0940.