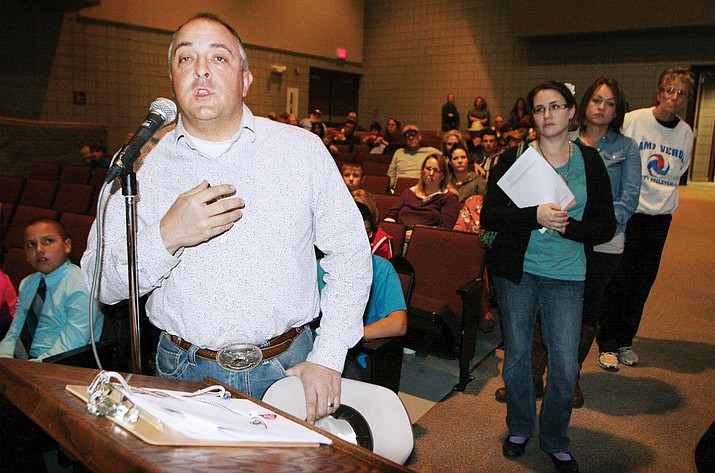 Camp Verde resident and former Camp Verde Unified School District employee Stacey Barker was one of many parents who spoke in favor of the district retaining its four-day school week. (VVN/Bill Helm)

CAMP VERDE – At the end of Tuesday’s public forum at Camp Verde Unified School District, one question remained in the minds of those who attended.

Will the school district stick with the four-day schedule of the past three years?

Though not everyone at the forum spoke in favor of not fixing “what isn’t broke,” most everyone who spoke said that they wanted nothing to do with a five-day school week, nor a year-round schedule.

Whichever schedule the district’s governing board chooses, board president Christine Schneider said she was “profoundly uplifted that we had such a good turnout.”

Said dozens of parents, teachers and students on Tuesday, education is important. But it’s not the only responsibility of a school.

Topics such as quality family time, time to do homework, even the needs of split families and potential custody battles were brought up by folks not interested in a change in schedule.

Other than custody concerns, most arguments were used both in favor and in opposition of retaining the four-day schedule.

“What can we do to give our students the most?” Schneider asked. “And for this school district, what’s best?”

What’s best, according to Dr. Dennis Goodwin, Camp Verde school district superintendent, is providing a quality education for the district’s students, and preparing them for the real world.

But the superintendent is not a decision-maker on the district’s schedule.

That, he has said, is why he has not said which calendar he thinks is best.

“All I have done is provided academic information. Those five people [board members] have to make that decision,” Dr. Goodwin said. “It doesn’t really matter what I think. What they choose to do, I will implement. My job is to carry out their direction.”

Information provided by the district prior to Tuesday’s forum stated that the district’s student attendance has been at 92.5 percent “whether it is a four-day or five-day” schedule, but that staff attendance “has improved” with the four-day school week.

Whether the district is in class four days each week or five days, the Arizona Department of Education will pay CVUSD the same dollar amount, approximately $3,600 per Average Daily Membership, which is defined as the aggregate days membership of a school during a certain period divided by the number of days the school was actually in session during the same period.

Students could be in school as few as 144 days and as many as 199 days and for each day in school, the district receives the same amount of money based on the ADM, $3,600.

Currently, Camp Verde Unified observes a 150-day 4-day-a-week school calendar. Each grade – each student – is in class more than the minimum amount of hours required by the State of Arizona.

Come April, the board will likely have decided which schedule is appropriate for CVUSD students in 2017-2018.

“Now it’s to the point where the board had heard from the community. Now it’s time to decide what’s best for our students,” Schneider said following Tuesday’s forum at the Phillip England Center on the CVUSD campus.

“As we explore the options, we need to know the impacts, on their grades and their lives. But also the impact emotionally and socially for the students.”