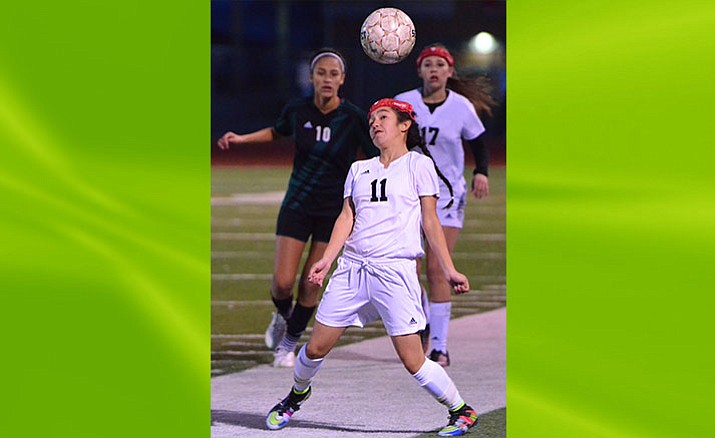 Last week with the Lady Marauders’ season on the line, Urueta scored four goals in their 15-0 win over Lee Williams. That win punched Mingus Union’s ticket to the 4A state tournament.

Urueta scored two early goals against the Volunteers, earning a brace before some fans got settled in. She finished with four goals on the night.

While she is an FC Barcelona fan, she chose Brazilian greats Ronaldinho and Neymar as her favorite players, over fellow FCB star Lionel Messi, who won world player of the year four times in a row.

Urueta likes playing truth or dare on the bus and remembers fondly Mingus’ 6-2 win over Youngker.

VVN: Do you have a favorite soccer team?

Urueta: I don’t know, I just like the way that they play and I’ve just always been a fan of them.

Urueta: My all-time is Ronaldinho and also Neymar, I like him, yeah.

Urueta: I like how Ronaldinho is a play maker and stuff and then also their skills that they have.

VVN: How long have you been playing soccer?

Urueta: Since I’ve been like 4, so a long time.

VVN: What does it feel like to score a goal or score multiple goals in a game like that?

VVN: What’s the most goals you’ve scored in one game do you think?

Urueta: Ummm, probably, I’m not really sure, but maybe like five, at most.

VVN: How has it been like fitting into this team? It feels like it’s a good mix of veterans, older players and kind of younger players?

Urueta: Yeah, it’s really good, I think we have been playing good together, considering there is a lot of underclassmen here.

VVN: You guys have some really good older and younger players, how do you think you guys have fit in?

Urueta: I think we kind of just click I guess, with everyone.

VVN: Looking back on this season, what game has been the most fun?

Urueta: Youngker was fun, it was a challenge and it was aggressive but it was a good-earned win.

VVN: What kinds of things do you do on road trips when you’re on the bus? Do you listen to music, do you do homework, do you talk with friends?

Urueta: We usually play like truth or dare. I don’t know, we just mess around.

Urueta: Pretty much any, except country.

VVN: Do you have favorite movies or types of movies?

VVN: What’s your favorite movie? Do you have one?

Urueta: Algebra, I don’t know, it’s not too difficult, but I’m pretty good at math.

VVN: What’s the toughest class you have?

VVN: It’s kind of looking way ahead, but where do you see yourself in five years?

Urueta: Hopefully out of here, but I don’t really know, probably college.

Mingus girls fall in 1st round of soccer playoffs

The Mingus girls soccer team’s season came to an end on Wednesday night in the first round of the state playoffs as a rough first half was too much to over come.

No. 2 Phoenix Thunderbird (13-1-2) jumped ahead of the Lady Marauders 5-0 in the first half but Mingus Union held the Chiefs scoreless in the second and scored to finish the game 5-1.

While the Lady Marauders were short handed due to illness, including to the starting goalkeeper, they recovered in the second half and almost scored a second goal as time ran out.

Freshman midfielder Marli Urueta scored for Mingus (7-6) with three and half minutes left.

It was No. 15 Mingus Union’s first playoff appearance since 2015.

During the regular season, Thunderbird beat the Lady Marauders 4-1.

Thunderbird will host No. 7 Tucson Catalina Foothills in the quarterfinals.