Mingus boys gunning for No. 3 seed for region tournament 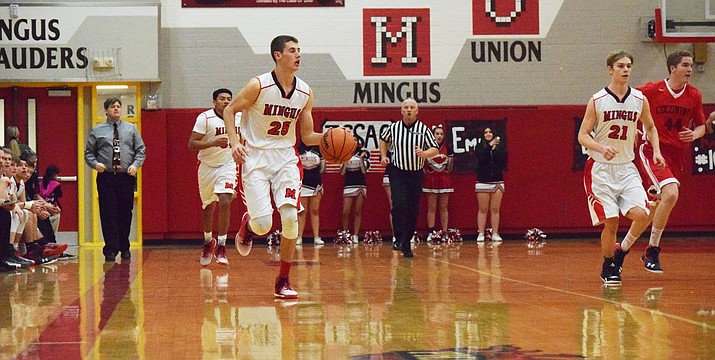 Mingus sophomore Chaz Taylor scored 13 points in Tuesday’s loss to Flagstaff. Friday, the Marauders are on the road at Lee Williams in Kingman. (VVN/Vyto Starinskas)

FLAGSTAFF -- Mingus Union boys basketball lost at Flagstaff but their performance against the No. 8 Eagles was promising.

“I’m never really big on enjoying a loss, but we played well,” said Mingus Union head coach Dave Beery. “We played pretty well, I think we showed that we can compete with a very good team. Flagstaff’s a pretty dang good team, so they had 12 seniors, it was their senior night, they’ve got kids that are experienced, kids that have won a lot of games, especially the last three years, so for us to hang with them and have the lead in the fourth quarter, was important for us and good for us confidence wise but a loss is still a loss.”

The Marauders (13-16) trailed by six after one quarter, by four at the half and the game was tied going into the fourth quarter.

Senior Issac Escalante led the way with 19 points for the Marauders, while senior Miles Tapija had 15, sophomore Chaz Taylor had 13 and senior Chase Paquin scored 10.

Mingus Union sits in third in the Grand Canyon Region with a 5-6 record.

The Marauders close out the regular season at No. 24 Lee Williams (11-12) on Friday, hoping to hold on to that third spot heading into next week’s region tournament at Flagstaff.

“We’re kind of in a spot now where we control our destiny a little bit,” Beery said. “The way our region is, I think Flag is kind of ahead of everyone else and after that I think it’s kind of a crap shoot, everybody is capable of beating everybody. There’s no teams that are walk overs and we want to get the win Friday at Lee Williams and put ourselves in position to have the highest seed possible, which probably looks like a three seed in that region tournament.”

Marauders only scored one point in the second quarter.

“Again, the first half was very, very difficult,” said Mingus Union head coach Frank Nevarez. “We had a very poor first half. Defensively we played pretty well. In fact the second half, we beat them the second half but you can’t start out 16-6 first quarter and then try to make up the difference.”

Mingus Union scored the first few points of the game before going being in the first quarter. They did however rally in the second half.

“From that point on, I don’t know, we lost our composure,” Nevarez said. “So other than that, second half we came out, we played very well defensively, we scored points. We literally won the second half but we were too far in the hole after the first half.”

Mingus Union has lost four in a row, but three of those losses were top 11 teams and the other, to No. 26 Mohave, was on the road.

The Marauders enter Friday’s regular season finale fifth in the Grand Canyon Region with a 3-8 record.

Nevarez said, other than No. 1 Coconino and Flagstaff, the region is very competitive.

“It is but in our region you’re really looking at Coconino and Flagstaff, they’re by far the cream of the crop,” Nevarez said. “Flagstaff has only lost one, which was to Coco.”

The Marauders close out the regular season at No. 17 Lee Williams (11-10) on Friday.