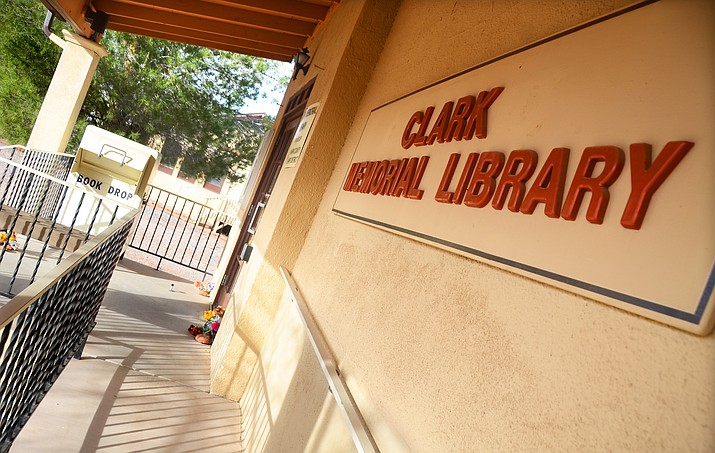 Clarkdale is considering the possibility of closing Clark Memorial Library because of the economy. The Community Services Commission is looking at shifting resources to pursue new and more robust programs for the community. (VVN/Vyto Starinskas)

CLARKDALE – It may be time to say goodbye to Clark Memorial Library.

“In order to adapt to our new economic realities, Clarkdale has taken a number of steps in the past 8 years to streamline our staff (through modifications to our Organizational Chart), our Board and Commission structure (through consolidation or elimination of certain boards and/or commissions) and to reduce our operating expenses,” stated a staff report from Mabery.

Following several public meetings, the Community Services Commission voted to forward a recommendation that the library be closed in order to shift resources to pursue new and more robust programs and events for the community, the report continued.

How closing the library became a recommendation

The Commission was formed in January 2016 by consolidating the responsibilities of the former Library Advisory Board and the Parks and Recreation Commission.

Early in the new Commission’s tenure, they were tasked by the Clarkdale Town Council to prioritize the Community Services Department’s operations, programs and events to better align with Clarkdale’s level of resources, explained Mabery.

The Commission began analyzing over 20 primary operations, programs and events handled by the Department, and others which had been identified as desires from prior community surveys, the report continued.

In keeping with the Town Council’s direction, and with their own vision and mission in mind, said Mabery, the Commission developed a priority list to guide them in their recommendation.

“Among many factors considered in developing priorities were results from several prior community surveys; operational costs of various events, programs and services; and, duplication of services by other agencies,” report stated.

The Commission met in a joint worksession with the Town Council in October 2016 where their priorities were reviewed.

The report stated that among the top priorities were the popular and quintessential Clarkdale events (Concerts in the Park, 4th of July, Halloween, Santa Comes to Clarkdale and Caroling in the Park), the continuation of Clarkdale’s holiday light display; cultivating the recently created Annual Blues Competition; developing and administering a more robust volunteer program; initiating a new Movies in the Park program; and developing outdoor recreation and other programming to align with the Verde River @ Clarkdale initiative.

Because library operations were not included among the Commission’s top priorities, the Council asked the Commission to further study the issue, explained Mabery in the report, and come back to the Council with a recommendation on whether or not to shift resources away from the library to other Community Services priorities.

Following several more public meetings the Commission voted to forward a recommendation in January that the Clark Memorial Library be closed at this time.

“We hope to engage the library users in the discussion and add the results of the survey of current library patrons to supplement the statistics and data that we already have,” stated the report.

The Clarkdale Library (Clark Memorial Library) is part of the Yavapai County Library District and the Yavapai Library Network. The Network consists of 42 public, academic, K-12, and museum libraries spread across Yavapai County and was established in 1985.

There are currently two other Yavapai Library Network libraries located within four miles of the Clarkdale Library – one at Yavapai College’s Verde Campus in Clarkdale, and the City of Cottonwood’s Public Library. The Clarkdale-Jerome School, located ½ mile away, also has an on-campus library that is available for students (but not for the general public).

Patron visits have averaged 5,000 per year over the past two fiscal years, with 2.63 patrons visiting the library per operating hour during that period.

While numerous people utilize library services (the Yavapai Library District lists 679 active library users in Clarkdale in FY 2015), Clarkdale has a small number of very dedicated patrons who account for the majority of total library visits. During one three-month survey period in FY 2015, 36 individual patrons accounted for 50 percent of the total patron visits to the library. Those 36 patrons each visited the library an average of 17 times over the three-month period, amounting to approximately one visit for each of those 36 patrons every 3.5 days.

Library hours were significantly reduced beginning in March 2016, but the number of monthly patron visits has remained constant since the reduction at an average of 417 per month, indicating that our efforts to align the hours of operation with patron visitation habits was successful.

Approximately 43 percent of patrons use our computers when they come to the library, making it one of the most popular services.

DVD and Blu-ray movies are the most popular items that patrons check out from the library (by policy, they can have eight movies checked out at any given time), accounting for 74 percent of all items circulated for the Clarkdale Library in FY2016. Print materials/books account for 25 percent of our circulation, audio-books and other miscellaneous items account for less than 1 percent of items circulated.

According to the Yavapai County Library District’s database, total circulation grew in the Clarkdale Library from FY 2015 to FY2016 by 15 percent and was attributed to increased movie check-outs.

The above data shows that while the vast majority of Clarkdale residents never use the Clark Memorial Library, there is a small percentage of the population who use the library frequently.

“In order to assure that those users have the opportunity to voice their opinions to the Town Council, the staff in the Community Services Department (who have a well-respected relationship with the patrons) initiated a Library Patron Survey in January,” stated the report.

The Library Patron Survey results are being collected and will be compiled and added to the other information that the Town Council will review at a future worksession.

Mabery said it is possible, but not for certain, that the Clark Memorial Library will be an item at their next worksession Feb. 28. The agenda has not yet been finalized.

After it is discussed at a future worksession, the Clark Memorial Library’s fate will then be voted on during a future Town Council meeting.