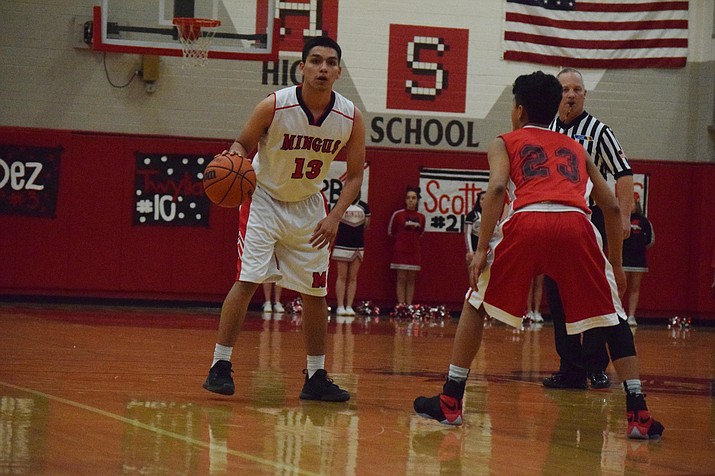 Mingus Union senior co-captain Issac Escalante scored 19 points in the Marauders’ 56-51 loss at Lee Williams. He scored 12 points in the second half as Mingus tried to rally and beat the Volunteers. (Photo by James Kelley)

COTTONWOOD – Mingus Union boys basketball lost their second game in a row and a chance to improve their postseason positioning on Friday night.

Mingus Union had beaten Lee Williams 67-54 at home on January 10 and 62-51 on December 2 in the Sedona Red Rock Tournament.

“We didn’t play very well,” said Mingus Union head coach Dave Beery. “We didn’t come ready to play, I think we had some guys that came in thinking ‘well, we beat these guys twice before, so we’re going to do it again’ and our guys didn’t really bring their best effort from the opening tip.”

No. 24 Mingus Union trailed No. 25 Lee Williams (12-13) by four after one quarter, then by eight at the half and 10 going into the fourth, but rallied to get to within one possession late.

“We got back in the game, we made it competitive but you can’t show up not ready to play and then try to turn it on later,” Beery said. “It didn’t work out for us very well.”

Senior Issac Escalante led the way for Mingus Union with 19 points, while junior Michael Bryan had 10.

The loss to last place Lee Williams dropped Mingus Union to fourth place with the region tournament coming up on Monday.

The state let each region decide on it and our AD asked me, I prefer a tournament, to me it’s fun,

Beery said each region decided if they wanted a tournament or not and that he voted for a tourney, even though he doesn’t have the best memories of region tournaments.

“It’s exciting for the kids and the school, but I do understand the logic of a team that wins the regular season, does really well and they get upset in the tournament and they don’t get to go on, that actually happened to me my junior year of high school,” Beery said with a laugh. “We were the No. 1 team in our state, got beat in the region tournament and didn’t make it to state, but on the hand, if you have a team that’s not doing very well, it’s hard to motivate those kids to play for something, if there’s a winner take all tournament, then it keeps them more engaged and to me it’s just more competitive and more fun, more like college basketball.”