Majority has it: Modified Thunder Valley Rally gets green light for 2017 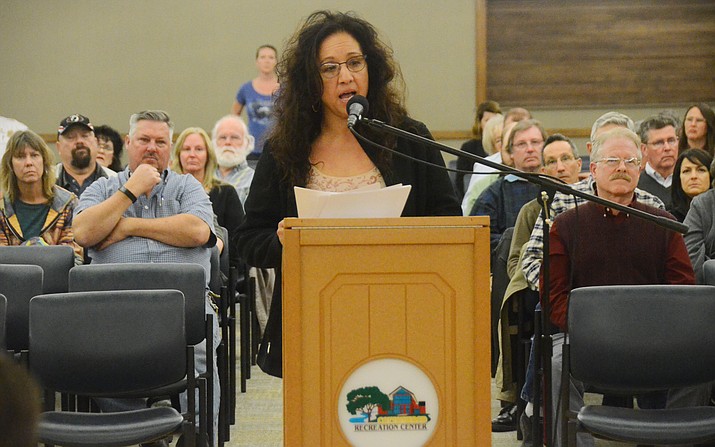 TVR Committee Member Mitch Levy said Old Town merchants have been unyielding in their opposition to the event, without efforts to reach reasonable compromise. (VVN/Vyto Starinskas)

COTTONWOOD – Cottonwood City Council, with a split vote Tuesday night, gave the OK to hold the 2017 Thunder Valley Rally event in Old Town in the daytime, with the evening concerts held at Riverfront Park.

The proposal was presented by the Thunder Valley Rally Committee. In an effort to reach a compromise, they suggested that Old Town Main Street be closed during the day for the rally, and reopen at 7 p.m. The Main Stage, which features evening concerts, will move to Riverfront Park. There will be vendors at both locations.

TVR Committee member Rose Ortiz-Unruh said the plan addresses the three main concerns: The noise and crowd of the Main Stage concerts, the road closure of Old Town, and lack of parking.

The TVR Committee was also asked to whittle down the cost of the event. Administrative Services General Manager Rudy Rodriguez, broke down the math. In 2016, around $108,000 was invested in the event. This year, around $44,000 will be invested, which is a 70 percent reduction.

willing to compromise. If there is no other option, this is our proposal, he said. The Military Service Park will sponsor the liquor license for the event, and 25 percent of proceeds will be donated back.

Ortiz-Unruh said having it entirely in Old Town was best for the event, but she wants people to unify.

Elinski asked why this modified plan had not previously been presented.

The TVR Committee replied that there wasn’t a compromise on the other end, and felt that the sentiment of those who oppose it is “the entire event needs to go, but we’d still like to make money from it.”

Gottschalk presented a map during his presentation, which he described as a “starting point.” He also emphasized that he doesn’t speak for the Old Town merchants. In the presentation, Gottschalk suggested keeping Old Town open, but having one lane closed for bike parking. He also highlighted three different areas in town where the bikers could gather. In his presentation, he included a solution for overflow parking, a larger vendor area, restrooms, and a first aid station. He admitted that he doesn’t ride a motorcycle, and doesn’t have any experience in planning a motorcycle rally.

Gottschalk had presented a strongly-worded letter opposing the location of the rally before the Council in October.

The intent of the letter was to inform the Council and the public of his position - and the position of many other Old Town merchants – on Thunder Valley Rally.

The letter stated that the event negatively impacts the group’s businesses, and said that holding the event in Old Town was not a good fit. The letter requested that there be discussion about moving the location of Thunder Valley Rally, with over 40 signatures from local businesses.

After nearly 2.5 hours of discussion, including over 15 public comments from business owners, residents, and rally enthusiasts, there was controversy among the Council on whether to vote on the future of the event. Councilmembers who ultimately voted yes on the motion argued that the item needed to be voted on that night. Time was of the essence, Althouse and Allen said, because now there are only seven months left to plan the rally. There also was uncertainty among Council on what exactly they were voting for: To keep the event as is, or to consider the modified plan.

Elinski and Jauregui said they wanted a work session to take place in about a week. Both said they didn’t feel comfortable voting on the item at that moment. Jauregui said he wanted to hear a unified plan from both parties to be presented before Council.

Ortiz-Unruh said the TVR Committee has done everything that Council has asked of them, and said she was worn out. “When Trevor presented, we listened,” she said. “It’s up to you,” she told Council. “Take what we’ve given you and vote.