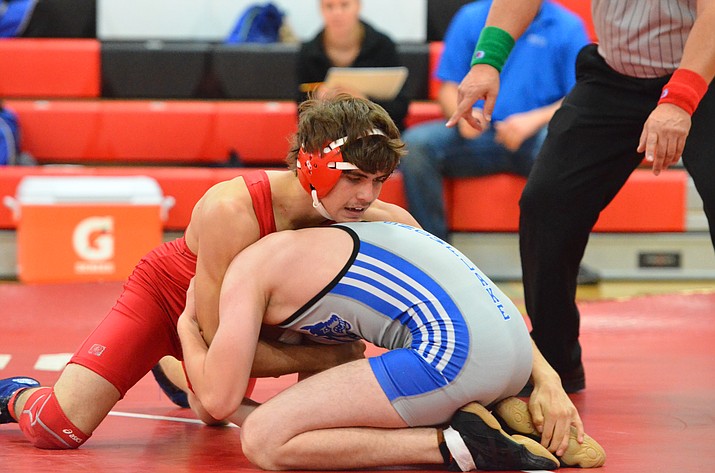 Mingus Union wrestling quadrupled the number of Marauders that qualified for state in head coach Kirk Waddle’s first sectionals appearance at the helm.

The second session of the Division III state wrestling tournament starts on Friday at 10 a.m. at the Prescott Valley Event Center, with the medal rounds starting at 7 p.m.

Last year only one Marauder made it to state.

Waddle credits the wrestlers for working harder and dedicating themselves to the sport and his assistant coach Klint McKean, who set up training curriculum that they hung on the walls, for the success at sectionals.

“It went really well,” Waddle said. “They just worked really hard, got in shape this year and we really focused them on wrestling.”

Svoboda (44-5), who moved to Cottonwood last summer, went 4-0 at sectionals and beat Chance Elmer of Payson 6-3 to win the title. Svoboda, who was seeded No. 1, has placed in all the tournaments he’s competed in this year, winning two championships and taking third and fifth.

Doerksen (31-14) was also seeded first but lost in the championship match.

Hardy (34-9) was seeded second and only lost in the semifinals. He’s the team’s only senior and a co-captain.

Miller (38-5) was also seeded second and only lost once. Miller is going to state for the second time in his two-year career.

Waddle said all their wrestlers impressed him, especially the four that made it to state.

“They all impressed me,” Waddle said. “From the start of the year until now, they really made strides but the four that are moving on to state really did well.”

Sophomore Michael Thurman also won a match for the Marauders. Waddle said he was a “core returning wrestler” and expects him to make it to state next year.

Sophomore Nick Lodico also scored points for Mingus Union, even though he is a rookie wrestler.

“Nick won a match, got beat by the No. 1 seed and then won second match before getting eliminated in the third match,” Waddle said. “He was probably one of my most improved wrestlers, He came in very raw and by the middle of the season he’s a legitimate varsity wrestler.”

Waddle said it is very hard to predict how well the wrestlers will do at state but that they are all capable of doing well.

“They all have the capability,” said the first-year coach. “They’ve all had various levels of success in pretty high level tournaments, so it’s hard to predict.”

The state tournament is made up of the top four finishers from the four sections.

Waddle said that well seeding can important, he told his wrestlers not to worry about it because he and McKean were seeded first and didn’t place in tournaments as youths.

“Lucas is seeded No. 2 in the state and still has a pretty rough road to the championship because everybody is good, they all have good records now,” Waddle said. “You just got to take it match by match and you’ve got to show up ready for your match and fresh and ready to go.”