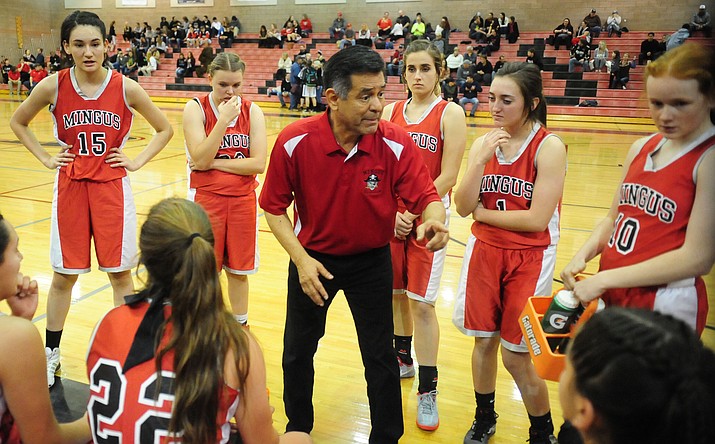 Mingus Union girls basketball found a solution to the Lee Williams problem and made it to the semifinals of the Grand Canyon Region tournament to finish the season on a high note.

The Lady Marauders (8-12) beat No. 17 Lee Williams 40-38 in the first round of the region tournament, three days after they lost to the Volunteers.

In the semifinals they lost 52-16 to No. 3 Coconino in Flagstaff.

Mingus Union lost 43-38 at Lee Williams to close out the regular season and 41-37 on Jan. 10 in Cottonwood to the Volunteers,

Mingus Union head coach Frank Nevarez said the quarterfinal Lee Williams game started followed the same script for the No. 21 Lady Marauders: go ahead early and then after chipping away, the Volunteers catch up.

“But this time I saw something in the girls a little bit different and they followed the plan that we had set,” Nevarez said. “They played just as hard in the fourth as they did at the beginning of the game but this time I think we played within our game and because of that, we were able to pull out a win.”

Razo scored 13 points against Lee Williams and Loring scored nine, including going 6-for-8 from the free throw line late to secure the win.

Nevarez said he was “extremely proud” proud of the Lady Marauders.

“We stayed within the scheme, we kept our composure and won the game,” Nevarez said. “These are the kinds of games that can help us going forward and to teach us how to win games In that respect, extremely, extremely proud, they did a great job.”

Nevarez, who just finished his first year as Mingus Union head coach, said he didn’t know what to expect when he took over the team but sees a lot of upside for the program after how they finished and the success that the freshmen and JV teams had.

After not playing last summer, Nevarez they will add open gym in April, practice in May, create a travel team and play in June and July.

“The summer is going to be very, very busy, I’m going to try and get in as many games as possible,” Nevarez said. “I think we have the talent, it’s a matter of just finding some court time, we need to play and that’s going to be the goal for the summer.”