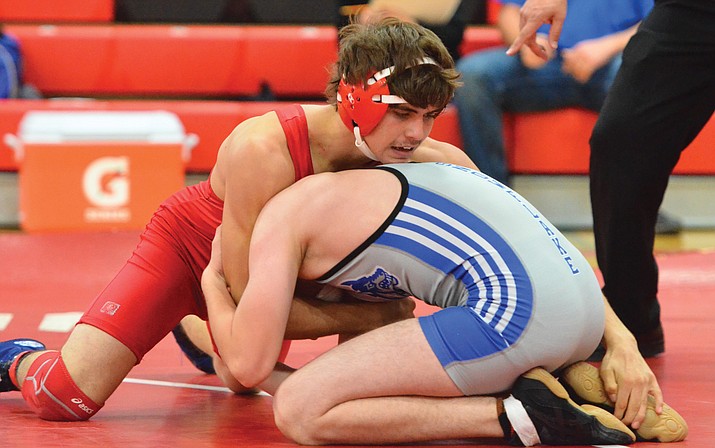 Senior Charles Hardy (34-11) finished fifth, winning the fifth place match 7-3. He opened with a pin in 4:35, then lost in the quarterfinals and then got another pin, in 2:32 before losing the eventual third place finisher. (VVN/James Kelley)

PRESCOTT VALLEY -- Three out of the four Mingus Union wrestlers that went to state made the podium, led by second place Lucas Svoboda.

“I’m really proud of these guys,” said Mingus Union head coach Kirk Waddle. “They bought into what we’re doing and their conditioning was superb and they drilled and drilled and got better every week.”

Svoboda (45-6) finished second in the 145-pound division. He moved to Arizona last summer.

“Awesome tournament, first year being at state, it turned out amazing,” Svoboda said. “It feels amazing, unbelievable, I’m really happy with how much progress I’ve made. It’s unreal, but I couldn’t have done it with out my teammates and coaches.”

Senior Charles Hardy (34-11) finished fifth, winning the fifth place match 7-3. He opened with a pin in 4:35, then lost in the quarterfinals and then got another pin, in 2:32 before losing the eventual third place finisher.

Hardy’s fifth place match with Dylan Saenz was a reunion for the Mingus alumnus Waddle, as he wrestled with Saenz’s coach Jim Anders at NAU in the ‘70s.

“It was kinda fun seeing him but the kids did really good,” Waddle said.

Sophomore Trent Miller (38-8) finished sixth. He won 6-5 in the first round then lost 4-3 in the quarterfinals, before winning with a pin in 3:46, then won 6-2, before losing in the third place semifinals 5-4 and by a fall in the fifth place match.

The Marauders finished tied with Snowflake in the team standings, despite only sending four wrestlers to state.

“They came in here and they weren’t intimidated and their conditioning showed,” Waddle said. “It’s what I expected but I didn’t expect it so quickly.”

Svoboda said he was worried about the team at first but has been impressed by his teammates.

“The season’s been great, going into it, we didn’t have very many guys coming out, so I was thinking ‘wow, we’re not going to be strong as a team’ but we’ve made huge progress,” Svoboda said.

Waddle credited all his assistants but especially Klint McKean, who won the 2001 112 pounds state championship for Mingus.

“It was a successful recipe,” said the first-year coach.

Svoboda and Waddle like the Marauders’ chances next year.

“I was proud of the whole team,” Waddle said. “I had a couple guys right on the bubble of getting here but now we’re just starting to look forward for next season, we’re already talking about the offseason and give them a little bit of time and then get them back in the weight room and the wrestling room.”