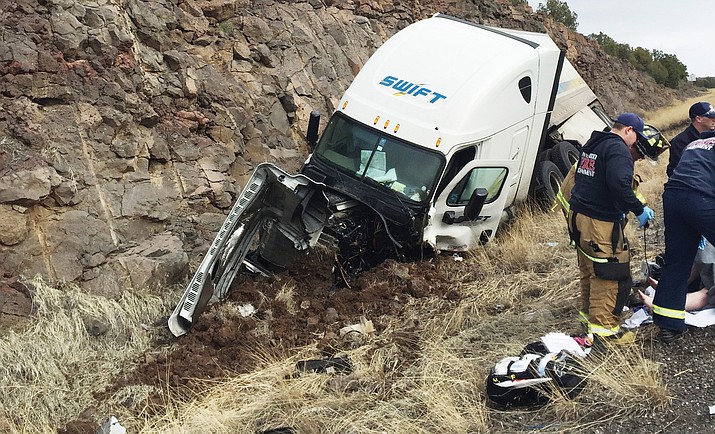 A carjacking suspect in a stolen vehicle fired at pursuing law enforcement vehicles along I-17 Sunday morning before colliding head-on into a commercial vehicle. I-17 was closed for 10 hours while DPS investigated. (Photo courtesy of DPS)

MUNDS PARK –A carjacking suspect in a stolen vehicle fired at pursuing law enforcement vehicles along I-17 Sunday morning before colliding head-on into a commercial vehicle.

Around 9:51 a.m., the Arizona Department of Public Safety received reports of a red Mustang being driven recklessly southbound along I-17 at milepost 298, north of Camp Verde.

The Mustang collided with another vehicle, said DPS in a news release, and the suspect left the scene on foot and traveled to the northbound side of I-17.

The suspect then took a white SUV from its occupants and fled, with troopers pursuing, said DPS.

Troopers came under fire from the suspect during the pursuit; no one was injured by the gunshots.

The SUV exited I-17 at exit 289, but returned traveling northbound on I-17, explained the release.

DPS said near milepost 305, the vehicle crossed over the median and drove northbound in the southbound lanes of travel.

At 10:20 a.m., the suspect collided head-on with a commercial semi-truck southbound on I-17 at milepost 307.8, which is 15 miles south of Munds Park, stated the release.

After colliding with the commercial semi-truck, the suspect confronted a Yavapai Deputy Sheriff, who assisted in the pursuit.

The deputy sheriff discharged his weapon at the suspect, and the suspect suffered serious life-threatening injuries from the collision and was flown to a hospital, said DPS.

The victim driver of the commercial vehicle was transported from the scene by ambulance with minor injuries, according to the release.

I-17 was closed from approximately 10:20 a.m. until 8:58 p.m. while investigators conducted the investigation into this incident, said DPS.

The investigation is on-going.