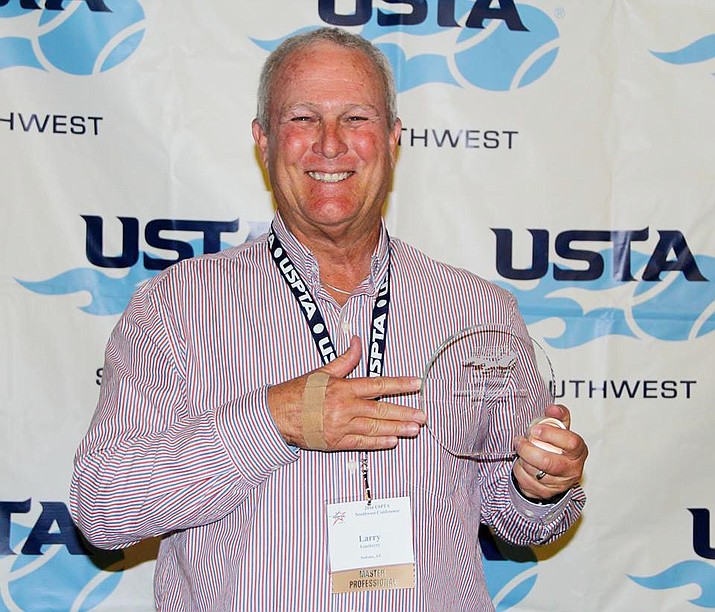 Mingus Union boys tennis is inexperienced but has a hall of fame teacher.

Lineberry has coached for 43 years, the last 25 of which have been in Verde Valley. He is the first hall of fame inductee from Northern Arizona.

“It’s a real honor to be included in the list of individuals who are in the hall of fame,” Lineberry said. “They are highly accomplished, high caliber individuals and to be a part of that group is the highest honor I’ve received and that I’ve been recognized for in my 40 year career as teaching professional.”

Lineberry has also been president, among other positions on the USTA Northern Arizona District board. He is one of the less than 1 percent of the USPTA to have earned the distinction of Master Professional.

Lineberry said his focus at Mingus is that the kids learn tennis and have fun.

“I’m not a concerned about the record of our team, I’m concerned that they enjoy themselves and that they learn the sport so that they will be competent and play for the rest of their lives,” Lineberry said.

How the Marauders will on the court is hard to predict as they lost their No. 1, 2 and 4 players from last year’s 1-13 team.

Lineberry said Mingus Union is up to 12 “enthusiastic” players however.

The Marauders open the season on Thursday when they host Moon Valley at 3:30 p.m.

“So I have more depth than I did last year but I will have to wait until next Thursday when we have our first match to see what the team looks like,” Lineberry said. “My general thought is that it’s a better overall team than last year.”

On Thursday the Marauders had a scrimmage against Sedona Red Rock in which every Mingus Union player saw action.

“They all enjoyed themselves and are learning to play the game,” Lineberry said. “They’re just not experienced and so they will be progressing with every match they play towards improving and the question is how fast does that player improve and that’s impossible to answer, every player has a different rate of improvement.”

Lineberry said that with school cut backs, after school sports like tennis are more important than ever.

“I love working with young people, I’ve been doing this for 40 years and I still do it because I love working with young people,” Lineberry said. “Unfortunately with a lot of school cut backs, physical education isn’t what it used to be and so extracurricular activities like an individual sport of tennis — which is one of the most rigorous sports a person can play — is a great character builder and I have an opportunity to influence kids that way and that’s why I still do what I do.”