Got a medical marijuana card? You can’t own a gun
Federal law prohibits selling firearms to marijuana users 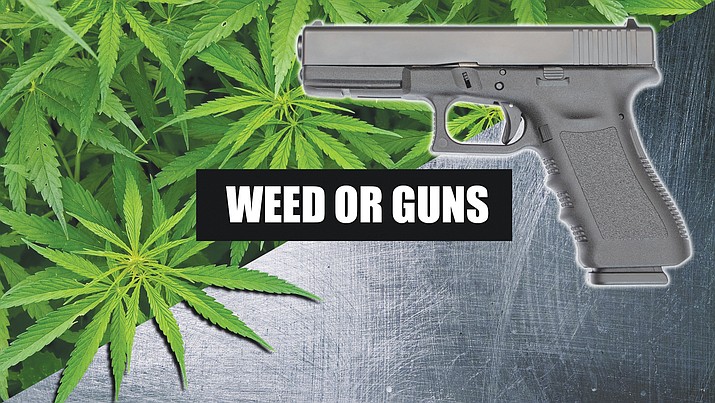 If you hold a medical marijuana card in Arizona, you cannot possess a firearm.

This may come as a surprise to you, said Sherrie Seibert, co-owner of Insight Firearms Training.

“We’re seeing customers coming into the store … and have no understanding, because either they are uninformed or misinformed, that, when they hold a (medical marijuana card) … they are a prohibited possessor by federal law.”

“The (U.S.) Department of Justice has long had a ban on gun sales to marijuana users,” Yavapai County Attorney Sheila Polk said.

That’s because, although the state of Arizona allows the use of medical marijuana, it’s still illegal to possess or use under federal law.

Seibert said, “My concern is, we’ve got so many people who are acquiring these (medical marijuana cards), who do not understand that it does have a negative impact on their ability to possess firearms legally.”

A letter sent to firearms dealers by the Bureau of Alcohol, Tobacco, Firearms and Explosives (ATF) several years ago said that “any person who uses or is addicted to marijuana, regardless of whether his or her state had passed legislation authorizing marijuana for medicinal purposes, is an unlawful user of or addicted to a controlled substance, and is prohibited by Federal law from possessing firearms or ammunition.”

The ATF went one step further, noting that, even if a person writes on the purchasing form that they are not a cardholder, if the dealer is “aware that the potential transferee (buyer) is in possession of a card,” the dealer still can’t sell the buyer a gun.

Seibert said that, in just about every concealed-carry class Insight holds, there are “a couple” of medical marijuana users who find out they’re in violation of the law.

This issue has been taken up in court, as well.

The Ninth Circuit Court of Appeals issued a ruling in July 2016, backing the ATF’s policy.

In that case, a medical marijuana cardholder was denied the right to buy a firearm even though she said she didn’t actually use marijuana; the court ruled that she “could acquire firearms and exercise her right to self-defense at any time by surrendering her registry card.”

The plaintiff in that case argued that the ATF letter was intended to “crush the medical marijuana movement,” but the court said if the federal government wanted to do that, all it would have to do is enforce the existing laws.

While she argued that her constitutional rights were being violated, the panel of judges held that she “does not have a constitutionally protected liberty interest in simultaneously holding a registry card and purchasing a firearm.”