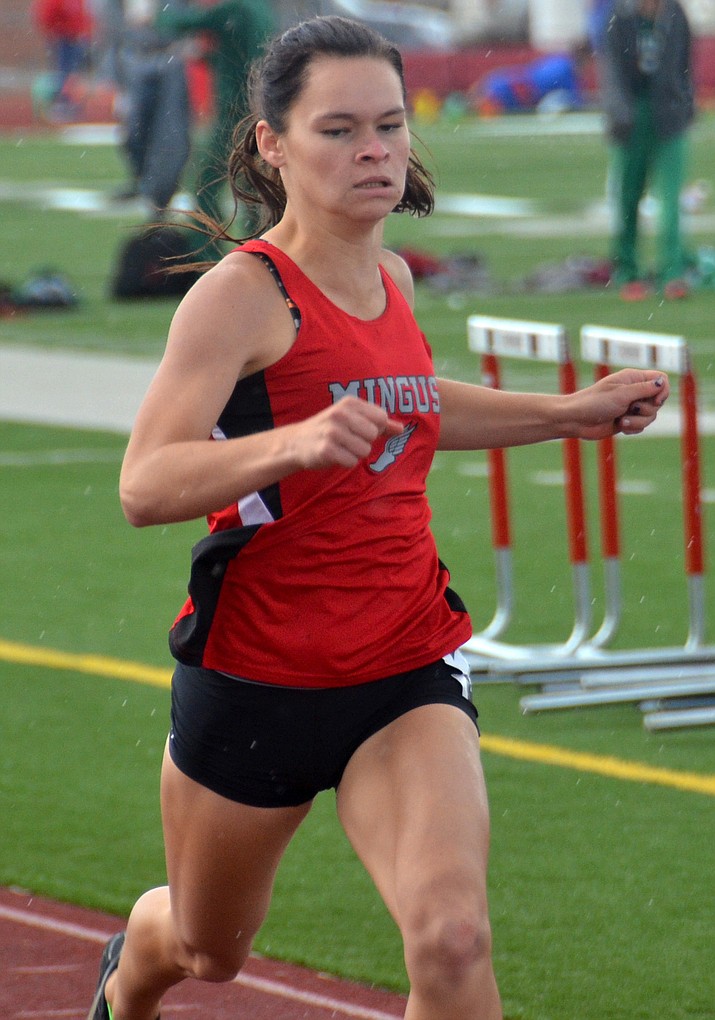 Mingus senior Auli Hanks is a force in both sprint events, long jump and triple jump and a key performer on the Marauders’ sprint relay team. Hanks was third in long jump at last year’s state championships. (VVN/Vyto Starinskas)

Mingus junior Hannah DeVore finished third at last year’s state championships in the 300-meter hurdles. She is also a strong performer in the 100-meter hurdles, all three open sprints, both the 400- and 1600-meter relays and may try her hand in the jump events this year. (VVN/Vyto Starinskas)

COTTONWOOD -- Mingus Union girls track and field may not have the numbers this season, but they have stars at the top.

While the Lady Marauders have about 23 athletes on the team this year, they do return two state medalists from a year ago: junior Hannah DeVore and senior Auli Hanks.

Hannah DeVore finished third in the 300-meter hurdles and Hanks was third in long jump at the state meet.

“They look pretty strong, we don’t have a lot of depth but we have some girls that have some experience, even at the state championship level,” said Mingus Union track and field head coach Yancey DeVore. “So we have a pretty good sprint corps, we’ve got a good hurdler, we’ve got a couple good jumpers and I’m optimistic about some of the kids that have been jumping so far this year.”

Hanks leads the sprinters after she competed in four events at state last year.

“We have a really good sprint corps, which is one of our strengths this year,” Yancey DeVore said. “We have three returning seniors from the sprint corps last year, Auli Hanks, she was on the 4 x 1 last year and she’s our top jumper right now in the long and high jump.”

“I’m really kind of excited about the jumps this year, we have Auli Hanks, who’s also part of that sprint corps, for high jump and long jump and she’s one of our stronger jumpers and my daughter Hannah DeVore, may try a little bit of long jumping this year,” Yancey DeVore said. “Also I have two triple jumpers that I’m excited about in Maria Meachum and Katelyn Prouty.”

Yancey DeVore and his wife Jennifer started the Verde Valley Track Club to give the kids an option to work out with during the winter, something the triple jumpers jumped at the chance to indulge.

“I think it’s just kinda given the little core group of athletes that showed up through the winter and I think it’s really paying off for some of them like my triple jumpers were showing up in the winter very consistently and I think it’s going to do them some good things in the pits once the season gets started,” Yancey DeVore said.

In middle distance and distance, Yancey DeVore said he has been most impressed with sophomore Meg Babcock but senior Rachel Valentine is right up there.

“We’re still trying to develop the other runners at that positions,” Yancey DeVore said. “We just don’t have a lot of depth right there, that’s where we’re pretty thin for the girls. We have some talented kids there, there’s just not very many of them.”

“We’ve got a lot of really young throwers out there and we have some kids that don’t have a lot of throwing experience,” Yancey DeVore said. “Summer Scott right now is probably our top girl thrower and she’s still working on developing as a thrower, so hopefully she can continue to grow and get better as the season progresses along.”