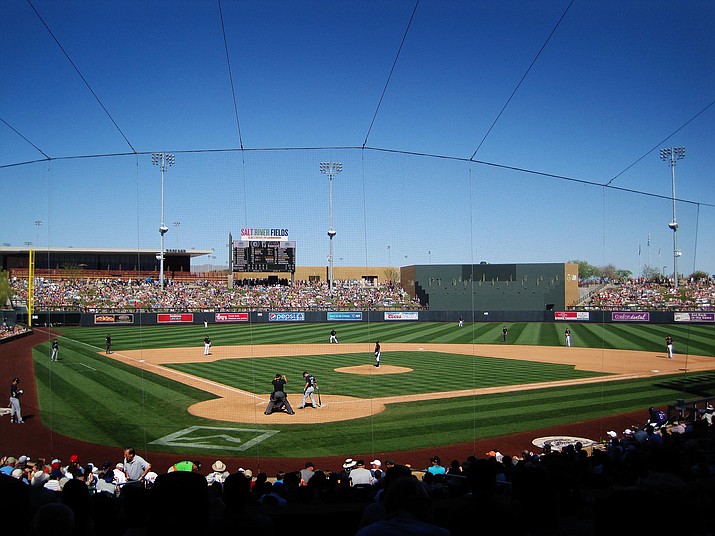 If you’re a fan of Spring Training baseball, visit the Arizona Diamondbacks at Salt River Fields at Talking Stick, located off the 101 Loop in Scottsdale. (Photo by Bill Helm) 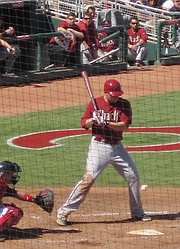 Spring has sprung. The grass has riz. I wonder where the baseball is?

The baseball – actually lots of baseballs – can be found in the greater Phoenix metropolitan area right about now.

Pitchers and catchers reported to their teams’ camps on Feb. 14. A few days later, the position players also arrived.

After a week of stretching, throwing and hitting, the Arizona Diamondbacks faced Grand Canyon University on Wednesday. But Saturday’s game against the Colorado Rockies was the team’s first official match of the spring season.

Salt River Fields at Talking Stick, located off the 101 Loop in Scottsdale, is shared by the Diamondbacks and the Rockies, one of five Cactus League ballparks that two teams call home.

From Feb. 25 through March 28, the Diamondbacks will play 32 spring games, including 17 at Salt River Fields, before playing exhibition games at Chase Field against Cleveland on March 30-31.

Maybe we’re taking liberties here by assuming everyone who reads this story is a Diamondbacks fan. Because the following is an alphabetical key to help make anyone’s experience at Salt River Fields most enjoyable.

Of course W stands for win, so root, root, root for the home team. If they don’t win it’s a shame … and if you aren’t a fan of the D’Backs, well go to mlb.com and look up your favorite team’s website.

The Diamondbacks are one of the 15 teams that call Arizona their Spring Training home.

A stands for autographs. Until about 40 minutes before the first pitch, autograph seekers can stand along the railing between sections 101-104 and 120-123. And for an extra John Hancock of sorts, the Diamondbacks have scheduled autograph sessions on the left field concourse from 11:45 a.m. until noon for day games – and from 5:45 p.m. until 6 p.m. for night games.

C stands for cameras. Major League Baseball has prohibited video recordings of game action, but hey, shoot all the still photographs you want, so long as your lens isn’t longer than 2.8 inches long.

D stands for ‘don’t forget to bring your glove.’ Spring training ballparks are much smaller than their regular season counterparts. Smaller ballparks mean that seats are much closer to the action. Bringing your glove isn’t just for ease of souvenir collecting. It’s for making sure you don’t get hit in the head by a batted ball.

F stands for food. And there’s plenty of it at Salt River Fields, with hot dogs, barbecue favorites, fry bread and pizza, as well as plenty of sweets and snacks, sodas and adult beverages. Ever had a Hawaiian smoothie? Well go to Maui Wowi, located at the center field plaza and keep cool on a warm, March day.

G stands for gates. And all of you baseball fans can enter the ballpark one hour and 40 minutes before the first pitch. Since most games start at 1:10 p.m., that means come on in at 11:30 a.m. to watch batting practice, infield workouts and pregame ceremonies.

K stands for keep off the playing field. Only authorized personnel are allowed on the field. Anyone else attempting to go out onto the playing field will not only be removed from the ballpark, but also personally escorted to jail.

L stands for lost tickets. If you lost your tickets, or if you forgot them on the kitchen table, the ticket office will gladly replace your duckets for a $5 processing fee. You must be the original purchaser of the tickets in order to have them reprinted.

R stands for running the bases. After the last pitch of Sunday games, children can run the bases – at no cost. Line up between sections 204 and 205 following the game to round first, second and third bases on your way home.

S is for smoking. Smoking is only allowed in designated areas. Ask an usher if you’re not sure where to take a smoke break.

S is also for souvenirs. And Salt River Fields has three Team Shop locations, as well as a limited amount of merchandise at a portable kiosk behind home plate. Team shop locations are: left field concourse, center field plaza and right field concourse.