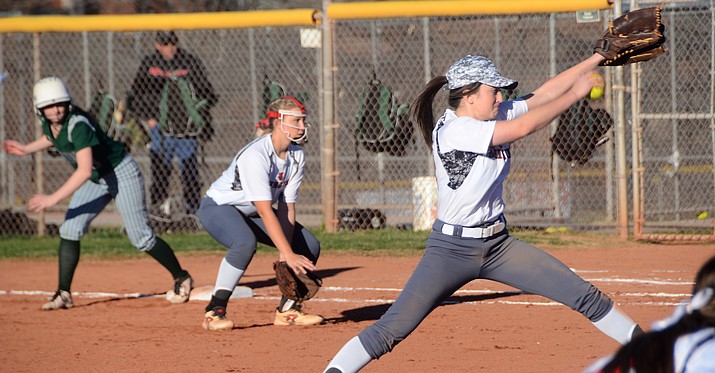 Mingus Union High School pitcher Kaycee Williams and catcher Morgan Mabery team up to make the catch at home plate during their game in Cottonwood Friday against Flagstaff. Mingus won 2 to 1. VVN/Vyto Starinskas

The saying goes that “revenge is a dish best served cold” and Mingus Union softball served it up at the plate last week.

The Lady Marauders’ (2-0) beat rivals Flagstaff 2-1 on Friday in their home opener, after losing to the Eagles 30-3 last year.

“I’m excited,” said Mingus Union head coach John Brown. “We struggled with these guys last year. We always struggle with them, it’s a rivalry, but last year we had a lot of injuries and so when we went to play them they kinda bored poured it on a little bit, beat us 30-3. They didn’t really need to, so it was personal for us.”

Mingus scored in the first inning and then after Flagstaff (0-1) tied it up in the third, scored the winning run in the fourth and held on to get the victory.

The win is also Lady Marauders’ first at home since April 27, 2015 when they beat Northwest Christian 9-2.

“It’s awesome, because this is the first home game that we’ve won in a super long time, so it’s a really good feeling to break that little curse that we’ve had,” said Mingus Union senior outfielder Maliah Zillmer. “We’ve always talked about it being a little monkey on our backs, that’s always been a kind of bug pestering us, so it’s like a really good feeling to finally break that curse.”

Freshman outfielder/catcher Jasmine Shults went 2-for-2 and sophomore utility player Maddie Bejarano and Zillmer were 2-for-3 with one RBI each. Junior Kaycee Williams pitched 3 innings, giving up 1 hit and striking out three and senior Krista Earl gave up 4 hits and an earned run in four innings, to go with one walk and three Ks.

The one negative for Mingus was the nine runners left on base.

“Really if we hadn’t left so many runners we probably would have had a better score, but I think nerves got the best of us a little bit but it’s really comforting to know that they fought through the nerves and still won the ball game, so I’m good with it,” Brown said.

Mingus Union opened the season the day before with an 18-0 win in five innings at Combs.

Brown said that while the score may look bad, the Coyotes are a solid team.

“(Thursday) was a good game for us, especially first out of the gate,” Brown said. “The team, Combs, they’re solid but they weren’t really that great, but we played super good. The girls hit the crap out of the ball and they ran the bases good, we didn’t let up and played out game. Eighteen to nothing sounds like lopsided game but the other team was better than it looked. I’m just happy we’re 2-0 and right now.”

Bejarano had 4 RBIs, while Williams and Zielinski had three. Williams pitched two innings and struck out two and Earl had five Ks in three innings as the Mingus pitchers limited Combs to three hits.

“That was a super good game for us, we won 18-0, our bats really came through in that game,” said Zillmer, who scored 2 runs and had 2 RBIs. “It was a super strong game that we had.”

The Marauders’ game on Monday against Greenway was postponed due to inclement weather. They will make it up on April 3.

Starting the year 2-0, finally winning at home again and going from losing to Flagstaff 27 runs to beating the Eagles shows the Lady Marauders are on the right track

“We’ve definitely come back and made it pretty far and it’s only the beginning of the season,” Zillmer said, “so I can’t wait to see where we’ll go in the end of the season.”