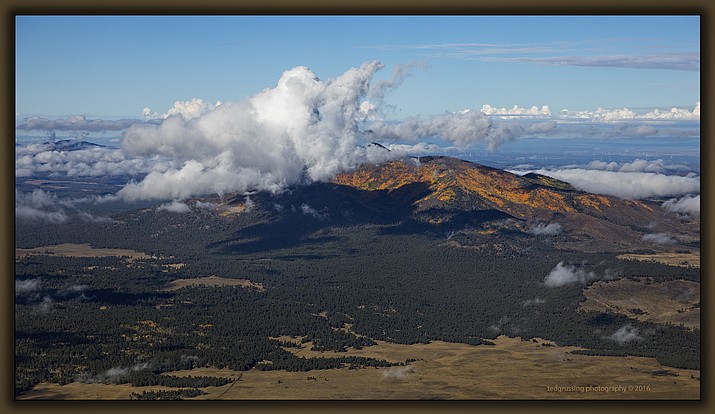 One of the things I enjoy most about flying is the solitude and quietude and the ever changing airscapes over planet earth … wrapping your mind around the fact that as you travel through the beauty of earth’s atmosphere we are hurtling through space circumnavigating the sun, our own star and the rest of the solar system is circumnavigating the center of the Milky Way galaxy. Each circumnavigation is called a galactic year which takes about 225 million earth years. About sixty one galactic years ago there was the Big Bang, the Milky Way was formed about 54 Galactic years ago … 15 galactic years ago life began on earth … .001 galactic years ago modern humans made their appearance and for the future, in 1 galactic year all continents on earth may fuse into a super continent and in 4 galactic years CO2 levels will fall to the point at which C4 photosynthesis is no longer possible and all multicellular life dies out … read more at: https://en.wikipedia.org/wiki/Galactic_year Fascinating stuff … life as we know it does not have a very long future in the cosmic timeline. Nor does it have much of a past … but to us it seems like forever until it isn’t.

So I like the solitary life and being a part of all that is … for now at least … soon enough it will be time to move on and continue the journey. I subscribe to the notion that we are spiritual beings who are having a human experience rather than the reverse … it feels right to me … so does being alone in the sky and back on earth, sharing life with my little friend One. She’s a trust fund kitty too :+) If you do estate planning, talk to your lawyer about setting up a trust fund for your pet (s) … it definitely makes them more adoptable if you die first.

So another day is wrapped … it was good, another day of carpet cleaning, healing, faceting (coming back fast), listening to Rod McKuen and not doing all that much. Tacos for dinner, watched Whiskey Tango Foxtrot with Tina Fey and it was good; it is based on the real life story of Kim Barker, Tina dedicated it to her father who was a Korean War Vet and journalist … worth the watch.

Have a terrific day as we continue the journey … probably less than 4 years to go … galactic years that is. Think when looking at the long term we should boost our production of CO2, maybe we can squeeze another year out of the deal. Smiling!

At nightfall…though I know I shall sometime no more

Open my eyes to the light or day, I am one who looks at stars when

Unchained from the work-bench at Nightfall.

They are a sign that I am not ephemeral,

Not you, nor you, whoever you are.

The dawn comes and the dark and the sign sparkling in the brooding night,

Sedona Pathways: Our Daily Journey, May 31, 2017
The quiet hour
Beyond
On the edge
perception
Event Calendar