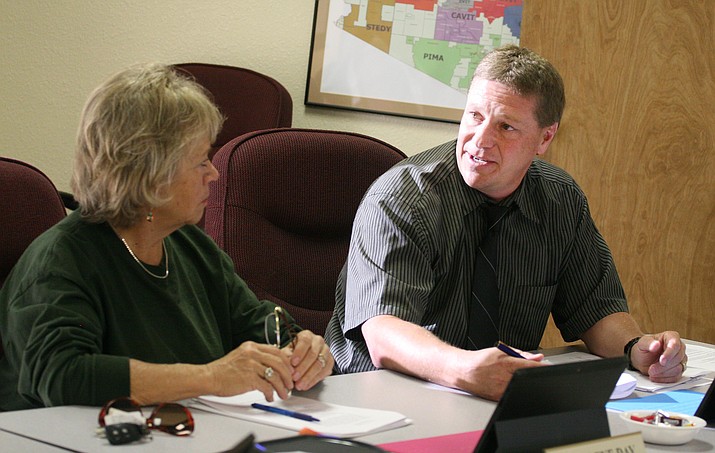 Bob Weir is now superintendent at Valley Academy for Career and Technical Education. For Weir, his greatest success at VACTE has been “rebranding the VACTE name and mission.” (VVN/Bill Helm)

VERDE VALLEY – After 24 years at Camp Verde High School, the past seven as the school’s principal, Bob Weir is now superintendent at Valley Academy for Career and Technical Education.

Big news for Camp Verde High School, but also big news for the Valley’s CTE programs. For Weir, his greatest success at VACTE has been “rebranding the VACTE name and mission.”

In just a few months since taking over for Interim Superintendent Lisa Aragon, who took over for retired CEO Lois Lamer – VACTE has gone from satellite CTE programs to “true central programs.”

The nursing and fire science programs are run as “true central campus programs” under the JTED model, Weir said.

“They are funded by VACTE and overseen by VACTE,” Weir said.

The Valley’s Career and Technical Education program now has “40 students in nurs[ing] throughout the year, and fire science has shown great growth in the skills attainment over the year,” Weir said.

VACTE has also started a central film TV program and has worked with Yavapai College on a night welding course, both centralized programs.

“The community support for VACTE has grown and the benefits are being shown in the new proposed courses,” Weir said.

One of eight candidates for the open position at CVHS, Douvikas was chosen for his “calmness [and] his experience with multiple environments” District Superintendent Dr. Dennis Goodwin said upon the hiring.

“Jason’s demeanor is so positive, he already knows what questions to ask,” Goodwin said.

In April, Camp Verde Middle School was recognized as a National Showcase School for it work with the Capturing Kids Hearts program.

Having swept the Valley for its ability to reach children not just academically but personally, Capturing Kids Hearts also captured the heart of Principal Danny Howe.

“People may not know who we are on the other side of the world, but [I knew that] we would make a world famous difference in the lives of everyone we come in contact with,” Howe said upon his school receiving the Flippen Group’s award.

Through the Capturing Kids’ Hearts program, teachers and staff learn processes to help students connect with both peers and adults on campus as they make learning fun.

Camp Verde high’s principal brought his wife Vicki along with him to the district. Actually, Dr. Vicki Douvikas’ accomplishments brought herself to the district, as she has joined Camp Verde Elementary School’s Title I teaching staff.

Said CVES Principal Britta Booth, Dr. Douvikas “has allowed us to do more diagnostic work and address students’ specific areas of concern earlier so as to improve reading at an earlier age.”

Booth also said that the school’s Cyber Cowboys robotics team has grown in “both size and skill under the leadership of Peggy Dickey.”

“This program has enhanced our positive environment and tells our kids every day how much we care about them,” Ward said.