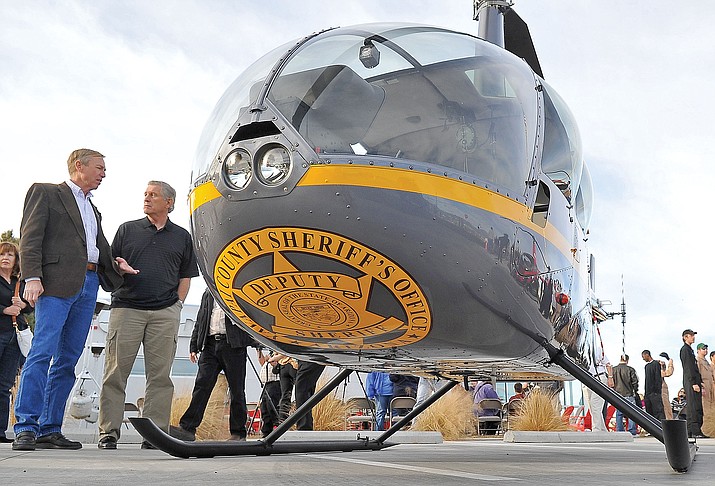 PRESCOTT — Yavapai County Sheriff Scott Mascher routinely tells people that the YCSO helicopter, Rescue-1, is operated at no cost to the taxpayers.

He can legitimately say that because the expenses to maintain the helicopter, fuel it, and pay for a pilot’s time all come from RICO funds.

In 1970, then-President Richard Nixon signed into law the Racketeer Influenced and Corrupt Organizations Act, known as the RICO Act, as part of the Organized Crime Control Act, and, by 1972, states were enacting similar laws.

While the title may evoke images of John Dillinger or Al Capone, RICO applies to a wide variety of crimes, from murder to arson, and fraud to drug trafficking.

Also known as “asset forfeiture,” RICO allows law enforcement to seize property they allege was used in the commission of crimes.

“The purpose of the civil forfeiture program is to separate a criminal from his ill-gotten gains, to remove the financial incentive to engage in crime, and to provide restitution to victims,” said Sheila Polk, Yavapai County Attorney. “In addition, the goal of the program is to put the profits from those illegal activities back into local law enforcement agencies to fund public safety programs to keep our residents safe.”

The money collected ends up in the hands of the county government for disbursement.

“All disbursements of RICO funds are made by a vote of the PANT (Partners Against Narcotics Trafficking) board, consisting of the county attorney, sheriff, and police chiefs,” Polk said. “If an agency has a (specific) need, they present the need to the board and we vote on it.”

Polk pointed out that the agencies are bound by law to use the funds for a limited number of kinds of purchases (see list), and that when she disburses the funds, she sends a copy of a letter outlining acceptable and prohibited use of the money.

It spent $1,163 sending staff to the Arizona Homicide Investigators Conference, and $19,911 on specially designed shelving for the evidence building, with smaller amounts paid for various equipment.

The Yavapai County Attorney’s Office spent $25,276, and the majority of that money went to training: $8,692. Other major expenditures included software ($6,783) and office furnishings and equipment ($7,483)

Law enforcement agencies are not the only place the money went.

“We also funded the Yavapai Family Advocacy Center and a bilingual child forensic interviewer for the Center, the Silent Witness Program” and paid for other programs, such as investigations for the Yavapai County Heroin Overdose Fatality Review Board, the Arizona Victim Assistance Academy, and substance-free high school graduation night contributions.