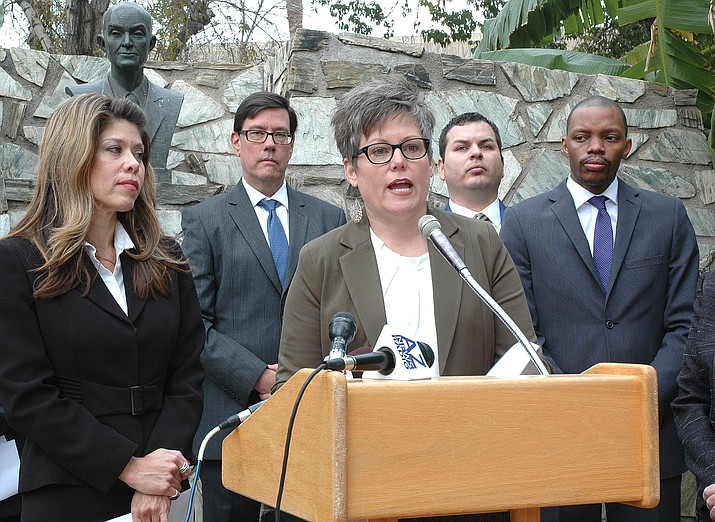 Senate Minority Leader Rebecca Rios, left, and Katie Hobbs, her House counterpart, lay out Monday what Democrats do and do not want to come out of the new legislative session. (Capitol Media Services photo by Howard Fischer)

PHOENIX -- Not willing to put it off until the last minute, legislative Democrats on Monday proposed asking voters as soon as possible to extend -- and expand -- a special sales tax that funds education.

“Investing in public education, including K-12 schools and universities, is critical to changing the trajectory of our state,’’ said Senate Minority Leader Rebecca Rios. She said Democrats will prioritize reducing class sizes, dealing with the teacher shortage and coming up with a long-term plan to ensure schools have the funds they need.

And at the top of that list is the renewal of Proposition 301.

That measure, approved in 2000, enacted a 0.6-cent sales tax levy earmarked for education. It raises more than $600 million a year.

But it also self-destructs in 2021. Rios said lawmakers should put the question of renewal back on the ballot sooner than later. But she said they also want to boost the levy to a full penny.

“This would result in an additional $430 million annually in funding for K-12 that can be used to recruit and retain teachers and fund our schools,’’ she said.

That stance puts the Democrats at odds with Gov. Doug Ducey and Republican legislative leadership who in no hurry to put the issue of even simply extending the 0.6-cent levy on the ballot. Senate President Steve Yarbrough said just this past Friday he sees no way to put together the votes this year for such a plan.

“I think it’s probably obviously more than a year exercise,’’ he said. In fact, Yarbrough is throwing cold water on any meaningful action in time for the 2018 election, saying “we’ve got time beyond that,’’ he said.

And incoming House Speaker J.D. Mesnard questioned whether voters are willing to tax themselves more for education.

“Prop 123 was a close vote,’’ he noted of last year’s ballot proposal to put an extra $3.5 billion into public education over the next decade. And that did not even involve higher taxes, with most of the funds actually come from a trust account already set aside for education.

“How things are packaged certainly matters,’’ he said. “We can begin the discussions of what that looks like.’’

But Mesnard, like Yarbrough, sought to tamp down expectations that voters could see the issue soon.

“I’m skeptical, frankly, that those will culminate in something in 2018,’’ he said.

But it isn’t just the issue of extending and possibly expanding the sales tax that divides the minority Democrats from the GOP majority in both chambers as well as Ducey.

House Minority Leader Katie Hobbs wants to review and cap some of the tax cuts that already have been put in place. And her prime target is the law that allows corporations to divert some of what they owe the state in income taxes to instead help parents send their children to private and parochial schools.

As originally crafted, lawmakers limited that annual diversion at $10 million.

That law, however, allows that to grow by 20 percent a year. The result is that the cap this year is now more than $60 million.

And if left unchecked, legislative budget analysts figure that cap would top $660 million by 2030.

But that could be just theoretical. That’s because a series of corporate tax cuts approved by the Republican legislature during the recession should cut corporate income taxes from $571 million in 2016 to just $281 million in 2020.

That trend has not gone unnoticed.

“If the past leaders had put Arizona first instead of buckling to special interests we would have an additional $835 million annually in our state to invest today and for the future,’’ Rios said. That includes a 30 percent cut in corporate income tax rates.

Rios is not suggesting those tax rates be increased to where they were. But she said it’s “time to draw the line’’ on new ones.

That, however, runs smack-dab into the general Republican philosophy that lower tax rates lead to more economic development which, in turn, then increases overall revenues.

Rios countered that if these tax breaks really worked than the state budget this coming year would be more than $9.6 billion -- the same as it was in 2007. And she pointed out Arizona’s population that year was less than 6.2 million; by last year it had topped 6.7 million.

Steve Farley, the assistant Senate minority leader, was more direct in his criticism of the policy of cutting taxes to spur the economy.

“This governor and this majority has sold Arizona a bill of goods because we haven’t seen any of that,’’ he said.

“All that money in tax cuts ... hasn’t gone to create new jobs or help the jobs that are here,’’ Farley continued. “That money has gone away to New York investment banks and the names of shareholders of large corporations.’’